On Wednesday, February 6, three former workers of two popular restaurants in Georgetown won a combined $4,237 in unpaid wages.  After many months of struggling for their pay, the workers returned to the restaurant with more than 50 allies from the community, who stood outside the restaurants to ensure that the three workers were paid. Sure enough, just minutes later, the workers emerged  with their newly won wages. 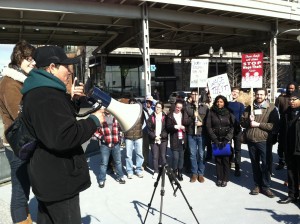 DC Wage Theft Coalition supporters look on as a  worker recounts the struggle to gain his wages. (Photo by Julia Kann/Union City)

Fresh off its victory, the group held a rally at which the workers repeatedly stressed the importance of fellow worker, community, and student support in the effort to reclaim stolen wages. DC Jobs with Justice, La Unión de Trabajadores and the rest of the DC Wage Theft Coalition – a group of labor, legal services, and workers’ rights organizations – will continue to support workers in the campaign to end wage theft in Washington, DC. But we can’t do it alone. We needed your support with wage theft at Georgetown restaurants, and we’ll need it again as we continue to send the message that we won’t tolerate wage theft in our city.

Thank you so much for standing in solidarity with the Georgetown restaurant workers. Please take the pledge so we can keep you in the loop as we join more and more workers in the fight against wage theft.