Chants of “la lucha – sí, la lucha – sí” (the struggle -yes, the struggle – yes) echoed off the DC Council chamber walls as more than 50 workers and community activists packed the Wilson Building on Monday, March 4th to demand more protections for workers against wage theft. DC Jobs with Justice, United Workers of DC, and the DC Wage Theft Coalition accompanied workers as they presented Councilmember Marion Barry with a giant paper bill for outstanding unpaid wages. The bill totaled more than $260,000, yet only 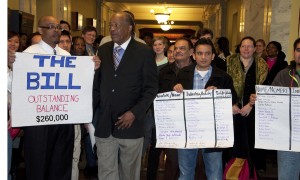 represented the wage theft claims of about 40 workers, a small number of the many more victimized by wage theft in Washington, DC.

Pledging to seek justice for the workers, Councilmember Barry quoted Frederick Douglass: “Power concedes nothing without a demand. It never has and it never will.” With that, the group filed into the performance oversight hearing for the Department of Employee Services. Witness after witness testified about the inability of the Office of Wage-Hour to protect workers who struggle to recover their rightfully owed wages. United Workers of DC President Carlos Castillo explained, “Without significant changes, going to the Office of Wage-Hour to file claims often becomes a waste of time, of money, and of opportunity to find a good option for daily work for a day laborer.” Moved by this and the many other testimonies from workers and advocates, Councilmember Barry vowed to investigate the workers’ 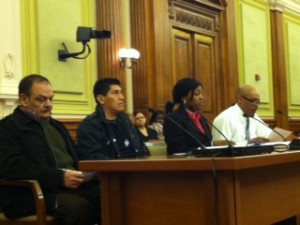 claims, to explore new resources, systems, and funding for the Office of Wage-Hour, and to consider proposing legislation to protect workers against wage theft.

Coming off a tremendous victory at popular Georgetown restaurants, Monday was another success for workers, the DC Wage Theft Coalition, and all who want to see DC become a city that upholds dignity and rights in the workplace. But there is much left to do. Moving forward, we’ll need to be louder, to bring even more people out, if we’re going to achieve strong protections for workers against wage theft. Join us!