POWER: Protecting Our Workers from Exploitation and Retaliation

DC Jobs with Justice has joined the national fight for protecting the basic civil and labor rights of workers that organize against exploitation. The POWER Campaign was developed with the vision of ensuring that immigrant workers do not face threats from their employers for trying to speak out against injustice.

As things are now, employers have the ability to intimidate immigrant workers by calling Immigration and Customs Enforcement (ICE) to report their undocumented status. Consequently, immigrant workers are often forced to accept unfair working conditions and pay because of fear of deportation.  This system of exploitation undermines the wages and conditions of all workers, because employers are able to take advantage of a vulnerable population and are often not held liable for labor law violations.

As a member of the POWER campaign we aim to bring together labor, faith, student, and community organizations around finding solutions to this issue. 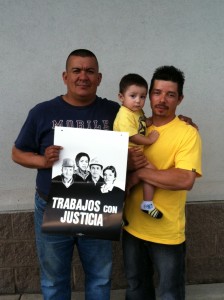 Hector (left) and Gregorio (right) face deportation, as a result of employer retaliation, in response for asking for their unpaid wages.

Hector and Gregorio moved to the United States from Honduras looking to earn money to support their families.  After working on several DC Water project they found out that their employer, Corinthian Contractors, had been paying them half of the wage mandated by the David-Beacon Prevailing Wage Act for city contracts.  Yet, when they tried to send a letter to their manager inquiring about the discrepancies they did not hear back.  Instead, three days later they were greeted by ICE officers at 4:45 AM at Hector’s house.  They were taken into custody along with Hector’s brother and wife, five months pregnant at the time.

Sadly, Hector and Gregorio’s story is not unique. Immigrant workers across the country are forced to accept unfair work conditions and exploitation or risk severe threats and retaliation from their employers if they try to stand up for their rights.  Worker organizing is essential for guaranteeing decent and humane workplaces for low-wage earners and for preventing wage theft, discrimination, and other labor law violations.  Yet, without stronger enforcement of legal protections, these important civil rights are often left ignored.

Furthermore, the POWER Campaign aims to ensure that American workers’ wages and conditions are not undermined by employers who pit them against a captive workforce of exploited immigrant workers.  The campaign will build power around local organizing, wage theft, health and safety, guestworkers and other areas where workers are often exploited, and will encourage policymakers to provide protections for victims of labor and civil rights abuses and to stop labor retaliation in its tracks.

The POWER Campaign was developed by Jobs with Justice along with the National Guestworkers Alliance, the National Day Laborers Organizing Network, the Excluded Workers Congress, and the National Immigration Law Center.

For more information about the POWER Campaign, visit: www.thepoweract.com