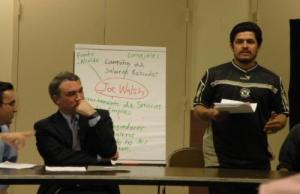 Members of the Union de Trabajadores de Washington, D.C., DC’s only day laborer association, were able to claim a victory Thursday night in their on-going campaign to battle wage theft. rnrnJoe Walsh, Director of the Department of Employment Services, agreed to a long list of workers’ demands for improvements to the DC Office of Wage and Hour. Walsh’s committments, when implemented, will better protect contingent workers by removing barriers to accessing Wage and Hour services, improving investigations, improving communication with workers that have filed cases, punishing unscrupulous employers, and working more closely with the Attorney General when necessary to pursue fines for employers.rnrn 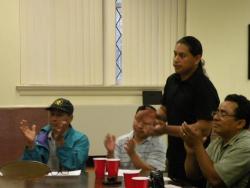 More than 30 workers, joined by allies from DC Jobs with Justice, Jews United for Justice, Foundry UMC, and the Washington Lawyers’ Committee packed the basement of Foundry Church early Thursday night to prepare for the meeting with Walsh. During the 2-hour meeting, workers carefully presented Walsh with recommendations for improving the services that to Office of Wage and Hour provides to day laborers and other contingent workers that have been victims of wage theft. Walsh took careful note of the recommendations and assured Union members that he would make sure that each of their demands were met. â€œI believe that all of you have had too many barriers already to finding a job,â€ Walsh told the group. rnrnDuring the meeting Walsh expanded on his ideas for improving investigations into unpaid wages claims. Among his plans is to create a â€œtask-forceâ€ within DOES that would connect different offices– including Wage-Hour, Unemployment, and Workerâ€™s Compensation, as well as the Attorney Generalâ€™s office– in order to share resources and information to track down unscrupulous employers. rnrnâ€œThis is a great victory for all workers in the districtâ€ said Ramon Zepeda, day labor organizer with DC Jobs with Justice. â€œCommitting to protect the most vulnerable of all workers in D.C. — day laborers, immigrants and other contingent workers — against Wage-Hour violations is essential to securing justice for all workersâ€ added Zepeda. rnrnThis initial victory comes after months of work by the Union de Trabajadores and DC Jobs with Justice to push the DC Council and Department of Employment Services to take action.