DC is Not Arizona! 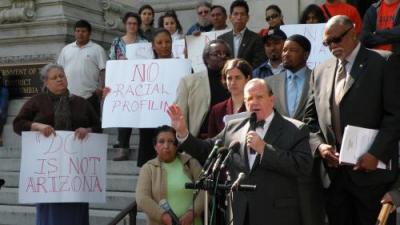 Condemning Arizonaâ€™s new immigration law program as â€œracist and perverse,â€ dozens of labor, community and immigrant rights activists spoke out forcefully yesterday about the dangers of collaboration between local police and Immigration and Customs Enforcement (ICE). rnrnâ€œPrograms like this are effectively pushing America back to the days of slave patrols,â€ said Ron Hampton, Executive Director of the National Black Police Association, at a press conference and rally outside DC City Council. “Secure Communities” – which is close to being implemented in the District by Police Chief Cathy Lanier â€“ involves local and state police in federal immigration enforcement, which opponents say will lead to racial profiling and the erosion of transparency, accountability and due process. rnrnâ€œI have hopes that Chief Lanier will not implement this perverse program,â€ said DC Councilmember Jim Graham (D â€“ Ward 1, at right). â€œIf, however, Chief Lanier refuses to back down, I will produce legislation that will prevent this program and I need the support from every one of you!â€ he added as the crowed cheered â€œNo More Arizonasâ€ and waved signs reading â€œNo Racial Profiling!â€ rnrnJaime Contreras â€“ Metro Washington Council, AFL-CIO Executive Board member and Area Director for SEIU 32BJ â€“ said, â€œWe will not stand by and watch as our community is targeted. This is not backwards Arizona…this is Washington DC, the capital of freedom. I hope that Chief Lanier comes to her senses and we will stand strong next to Jim Graham and the community in opposing this bill.â€ rnrnThe press conference marked the national kickoff of â€œUncovering The Truthâ€ â€“ a week long national campaign in more than ten cities to end ICE-police collaboration. Locally, DC Jobs with Justice has been leading a coalition to stop implementation of Secure Communities. rnrnâ€“ report/photo by Adam Wright, courtesy of Union Cities