Working Full-Time But Left Behind in DC’s Prosperity 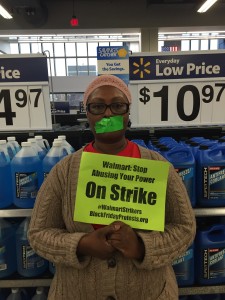 Melinda Gaino, a cashier at the H Street Walmart, went on strike in November of last year in protest of retaliation and low wages.

Melinda Gaino has a full-time job in DC, but she struggles to make it. She earns $9.90 an hour as a cashier at Walmart on H Street, NW, bringing home about $20,000 a year. That is too little to support the 45-year old mother and her four children in their SE apartment.

Melinda is an example of the many workers who have been left behind in DC’s growing economy, according to a recent report from DCFPI. She is a victim of an economy that is failing to create shared prosperity, to ensure that everyone who works hard can get by.

Melinda’s life as a low-wage worker is not unique. There are thousands who work in DC every day but barely stay afloat: the lot attendants who park our cars ($9.72 average wage), the cashiers who check us out ($11.03 average wage), the people who make our sandwich for lunch ($11.43 average pay for food prep workers).

These workers have not fared well, according to DCFPI’s report. Hourly earnings for DC’s lowest paid workers grew just 7 percent over 35 years, adjusting for inflation – about 2 cents per year – while the highest paid workers saw paychecks grow by 55 percent. The pay gap between the people who earn the least and those who earn the most in DC is at a record high.

Melinda typifies the challenge to stay ahead in other ways. She worked at Blue Cross/Blue Shield for three years earning $15.60 an hour, but then got laid off. She searched for employment for 6 months before starting at Walmart at a much lower salary. Her experience was typical – nearly three-fifths of high school graduates who lost a job in 2013 were out of work for more than 6 months.

Walmart has been hard for Melinda for other reasons. Last year, despite DC’s requirement that all employers provide paid sick leave, Melinda was disciplined for missing work when her 18 year-old was hospitalized.

“Even though I’m considered full-time and work 40 hours a week, I still rely on government assistance to get by,” said Melinda. “Living off $9.90 is too hard, having to provide for a college student and relying on food stamps.”

But Melinda’s story has some happy news, too, including the fact that her pay will rise to $11.50 in 2016, not as part of Walmart salary policy but because of scheduled increases in DC’s minimum wage. That will increase Melinda’s pay by $3,000 a year. It is an indication of what we can do to make the DC economy work better for everyone.

While grateful, Melinda knows this is not enough. In November, she joined other associates with the worker organization OUR Walmart in calling on the mega-retailer to pay a living wage of $15/hour so that she would no longer need to rely on public assistance despite working full-time.