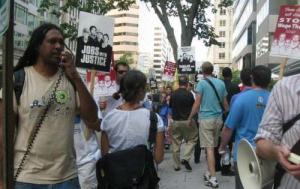 The Reserve Restaurant at 15th and L NW looks swanky from the outside, but behind the scenes workers claim the owner has been cheating them of their fair wages. rnrnFive former employees came to DC Jobs with Justice after being unable to claim close to $10,000 in back wages. They filed claims at the Office of Wage and Hour, but the owner, Moe Hamdan, ignored a summons to come to an official information gathering session to sort out the case. And he called the police on a group of workers who went to confront him in person. rnrnAfter several failed attempts to meet with Mr. Hamdan to resolve the situation, DC Jobs with Justice and Greater Washington Interfaith Worker just resorted to more dramatic measures, starting with leaf-letting and escalating to a large picket outside the restaurant on Friday. Since the campaign went public, two former managers have come forward and shared their own stories of being owed money. rnrnUntil the matter is settled, DC JwJ is asking the community not to eat at The Reserve, and to call and let the owner know they support businesses who support workers’ rights. rnrnMore coverage of the case:rn“Restauranteur Hamdan Targeted for Failure to Pay Wages”rn“Moe is Less at Local Eatery”rn“Workers Blow Whistle on Moe Hamdan’s Wage Theft”