rnA board of 10 prominent community leaders, chaired by Rev. Raymond C. Bell of First Rising Mt. Zion Church, heard testimony from day laborers, security officers, ironworkers, and cleaners – all of whom had their hard-earned wages stolen in different ways. rnrn

“The problem of stolen wages is very deep and very broad,” said Socorro Garcia, a day laborer and leader of the Union de Trabajadores, who has twice had to fight employers who refused to pay what they owed him. An estimated 60% of day laborers in DC experience non-payment or under-payment of wages. Frustrated by slow action by the DC Office of Wage and Hour, Garcia and others have been using direct action to help recover their rightful pay. Garcia urged other workers to report incidences of wage theft and work together for justice. “I know it is very difficult,” he said, “but we have to have the courage to step up and complain.”rnrnEric Sheptock, a homeless activist, echoed the sentiment, adding that education is important so that all workers know their rights. Last year, Sheptock was working for a cleaning company and being paid $7 per hour. After a friend pointed out that the DC minimum wage is $8.25, Sheptock spoke up and got the DC Office of Wage and Hour to investigate, resulting in an audit of the company and payment of back wages to Sheptock and all his co-workers. rnrn 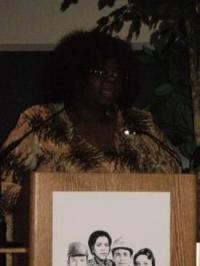 Keith Pugh and Carlene Olobayo, both former employees of Hawk One, worked for years providing security in DC public schools and buildings. When Hawk One shut its doors last fall, it left them and hundreds of co-workers without their final paychecks – and to this date most are still owed two weeks to a month of wages. “We have struggled on a daily basis,” Olobayo said. “It has been rough on everyone in different ways – some people have even lost their homes.” Pugh noted that since Hawk One was a city contractor, there should have been ways for the DC government to secure justice for the workers. “We need to make all government contracts binding,” Pugh urged. “We need to make contractors responsible for their workers and for paying the money they owe.”rnrn 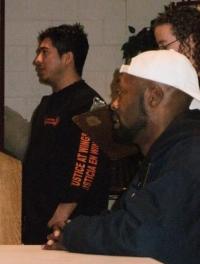 Adan Morales, formerly a reinforcing ironworker at Wings Enterprises Inc also spoke to the theme of government responsibility. While working on a government-funded project at the Navy Yard, Adan noted that only some workers – usually friends and family of supervisors – were paid the legally-required “prevailing wage” of $38 per hour, including benefits, while most workers received as little as $11 or $12 per hour and no benefits. “What Wings paid us barely covers the rent and not much else,” Morales said. “With the government wage, you can really take care of a family.” Morales said that knowing that some workers got the wage while he didn’t added insult to injury: “It hurt, like having an opportunity presented to you, then denied.” In October, Morales and several of his co-workers went on strike against Wings to demand that the company address this and other injustices. rnrnOther expert testimony examined wage theft from a national perspective, looked at wage theft in the restaurant and construction industries, and offered recommendations for local policy change. Speakers included Lisa Guerra of the DC Employment Justice Center, Joslyn Williams of the Metro Washington Council AFL-CIO, Jen Kern of the National Employment Law Project, Meghana Reddy of Restaurant Opportunities Center of DC, Kendall Martin of Ironworkers Local 5, and Sarahi Uribe of the National Day Labor Organizing Network. rnrnAttendees of the event included Muhammed Sheikh, Deputy Director of Labor Standards for the Department of Employment Services (DOES), who answered criticism of the DC Office of Wage and Hour, and Drew Hubbard, clerk for the Committee on Workforce Development, who invited participants to testify at upcoming oversight hearings of DOES. rnrn 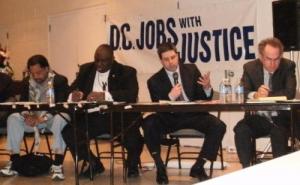 Board members pledged on-going support for victims of wage theft and will be meeting to issue recommendations over the coming weeks. “This is a call for organizing and solidarity,” said Ibrahim Ramey, head of Human and Civil Rights for the Muslim American Society’s Freedom Foundation. “We need to take the opportunity of this assault on workers to stand up and fight,” added ward 7 activest Michelle Tingling-Clemmons. Jacob Feinspan, Executive Director of Jews United for Justice, recalled the biblical tradition of organizing exemplified in the book of Exodus and noted that “we must connect the individual injustices with the larger systemic problems.”rnrnOther Workers’ Rights Board members present included: Christine Hart-Wright, Executive Director of Strive DC; Rev. Donald Robinson of First Baptist Church in Petworth; Marc Borbely, attorney with Neighborhood Legal Services; Rabbi Bob Saks of Interfaith Worker Justice of Greater Washington; and ward 8 activist Eugene DeWitt Kinlow. rn 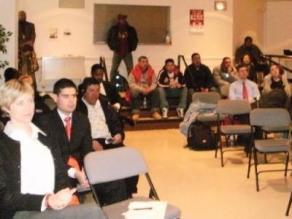 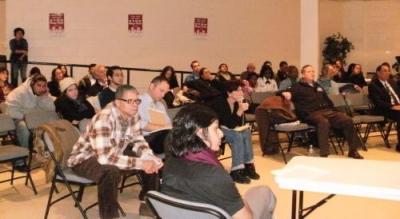