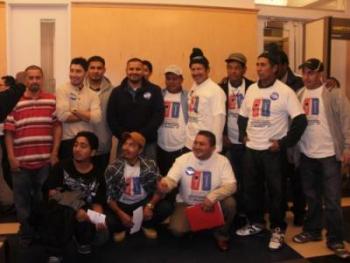 MMembers of the Union de Trabajadores and strikers from the Justice at Wings campaign used presumptive Mayor’s Town Hall tour of the city to move forward their demands that the city enforce its wage and hour laws and hold city contractors accountable. rnrnOn Oct. 12th, a dozen members of the Union de Trabajadores attended that Ward 2 Town Hall at Foundry UMC, just blocks from one of the city’s day labor gathering sites at 15th and P, NW. Workers pressed Gray on his plans to confront wage theft and ensure that workers get the pay they are owed. Gray stated that those who violate labor law should be treated like anyone else breaking the law– investigated and prosecuted. rnrnThe following week, amid a packed house at Ward 1â€™s Town Hall meeting at the Carlos Rosario School, Gray made an even bolder commitment to construction workers at rebar subcontractor Wings Enterprises. In response to a question by the Justice at Wings campaign regarding wage violations on the Sheridan Station/Hope VI project in Ward 8, Gray replied that wages are set out as part of a contract, which makes them law, and if a company is breaking the law then they should lose their contract.rnrnGray’s bold statements, if followed, would signal a radical change in practice for District agencies. The Union de Trabajadores has been working for years with the Office of Wage and Hour to improve the city’s capacity to recover wages for workers, but the Office is still understaffed and unable to collect penalties from employers that violate the law. rnrnThe District’s track record in punishing contractors who violate the terms of their contracts is even worse. Last week, DC Housing Authority building security prevented Wings strikers from testifying at the Jobs subcommittee of the Sheridan Station Hope VI project. The strikers had been invited by the subcommittee to participate in the meeting because they have proof that violations are taking place on this tax-payer funded project. But instead of taking their claims seriously, DCHA barred them from entering the meeting and subjected them to the humiliation of being thrown out of a public building. The incident suggests that DCHA is insensitive to worker abuse, or worse, may be actively attempting to cover up violations. rnrnPutting in place the tools to prosecute employers who steal from their workers and to hold companies with a pattern of violations like Wings accountable is going to be a big job for Mayor Gray, but DC Jobs with Justice, the Justice at Wings campaign, and the Union de Trabajadores will continue pushing rn