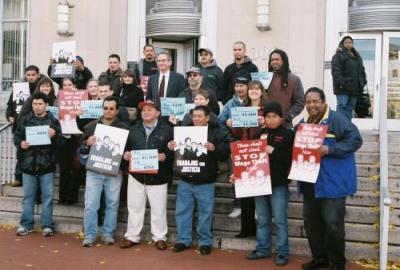 “Wage theft is a crime” was the theme of a rally and press event on Thursday, Nov. 18th that brought together workers, faith leaders, and community supporters. Held in front of the DC Metropolitan Police Dept. Headquarters, the rally gave workers a chance to speak out about the silent crime of wage theft and to call on the police and DC government to do more to protect workers. rnrnThe Union de Trabajadores, with DC Jobs with Justice, Interfaith Worker Justice of Greater Washington, the DC Employment Justice Center, the Washington Lawyers’ Committee for Civil Rights and other allies have been working for several years to improve the options open to workers to recover wages. While the DC Wage and Hour office has implemented many of the recommendations from workers, the office still lacks the staff and resources necessary and doesn’t have the authority to levy fines or penalties against employers who refuse to pay. rnrnThe need for police to be involved in fighting wage theft was a major theme of Thursday’s event. Ramon Hernandez and Antonio Lazo, both members of the Union de Trabajadores spoke about experiences calling police to report stolen wages. In some cases, police intervention has resulted in workers being paid what they are owed- without having to wait through a lengthy administrative process at the DC Office of Wage and Hour. However, some workers who have called police have been told that its not a police issue. The Union de Trabajadores has requested and been promised a meeting with MPD to discuss possibilities for collaboration.rnrn

The Nov. 18th event was organized as part of Interfaith Worker Justice’s National Mobilization to Combat Wage Theft, which featured actions and events in 50 cities. Kim Bobo, Director of Interfaith Worker Justice and author of “Wage Theft in America” spoke about innovative efforts happening across the country to battle wage theft. She was joined by local faith leaders who spoke in solidarity with workers, including Jana Meyer, Minister of Mission at Foundry UMC, Lizze Busch, organizer with Jews United for Justice, and Rabbi Bob Saks, a member of the DC Workers’ Rights Board. rnrnLaura Brown, Legal Director for the DC Employment Justice Center, also spoke about what workers should do to protect themselves from wage theft and where to go to get help. rnrnThe event was supported by DC Jobs with Justice, DC Employment Justice Center, Interfaith Worker Justice of Greater Washington, the Kalmanowitz Initiative for Labor and the Working Poor, the Union de Trabajadores, the Carpenters and Ironworkers unions and Jews United for Justice.