Who will be the scrooge of the year? Will be it Solanges Vivens, Walmart, Verizon, or many more?!

CEO of VMT Solanges Vivens is one of seven nominees for for Scrooge of the Year because, according to her nominator, “she used taxpayer funds to fight workers in District-owned nursing homes. She’s made herself rich on the backs of indigent seniors and hardworking, underpaid caregivers”.Scrooge of the year award is given annually to a person or company that has done dastardly deeds to workers in the District of Columbia. 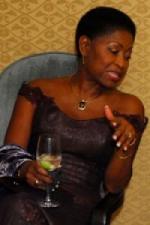 Some of our other nominees for Scrooge of the Year include Verizon, who has refused to agree to a contract with the Communication Workers of America (CWA); Walmart who has plans to build six stores in the District of Columbia but has not agreed to an enforceable community benefits agreement; and John Hill, President of the DC Public Libraries who was nominated because according to his nominator, “for the last 10 years, he has worked to replace the MLK library with condos and shops and to build a new “niche” library in a less desirable part of town”. Also nominated are Daycon, Liberty Maritime, and Governor Scott Walker. To vote for the scrooge of the year please visit http://www.surveymonkey.com/s/86RYSHK . It is a dollar per vote and all proceeds go to DC Jobs with Justice. The winner will be crowned next Saturday, December 10th at our Fundraiser Winter Cabaret. The Cabaret is being held at St. Stephen’s Incarnation Church at 1525 Newton Street NW, Washington, D.C. from 8:00pm to 11:30pm. The cabaret will feature line dancing, tasty desserts, wine and a lot more. If you are interested in attending the cabaret or sponsorship opportunities please go to https://afl.salsalabs.com/o/4023/c/188/p/salsa/event/common/public/?event_KEY=6468. The amount of your ticket or sponsorship is equal to your Scrooge of the Year votes. rnrn***** Capital Grille has also been added as a nominee for Scrooge of the Year!*******rnrnPhoto of Solanges Vivens courtesy of Union City