Scores of workers at the Washington Post rallied with a boisterous crowd of supporters including a small marching band on the sidewalk in front of the Post building on 15th Street NW during the noon hour today. 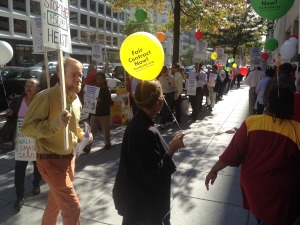 The message was clear: The workers at the Post will defend the legacy and the future of this newspaper, no matter the odds.

At stake are career-quality jobs at one of the nation’s cornerstone media institutions. Post owner Jeff Bezos, one of the world’s richest individuals and the founder of Amazon.com, bought the Washington Post Company last year. He has asked the workers at the Post for wage cuts of up to 17%, and those cuts would grow over time.

On the picket line, Post newsroom and business-side staff alike spoke of the pride they have in their work.

“We serve a bigger mission than just ourselves, and we want to be treated with respect. We don’t want the world. We just want what’s in our contract,” said reporter Matt Schudel.

“We want this paper to thrive! I love the Post!” said Lori Aratani, who’s a reporter on the paper’s metro desk.

“We help hold institutions accountable, and that’s important. We give a voice to people who maybe don’t have a voice. It’s important for us to be accurate and fair, and that takes a lot of experience and education both in school and on the job,” Aratani said.

Most galling to the workers is the fact that the proposed cuts seem ideological, not business-driven.

“These cuts are absolutely unnecessary!” said Fredrick Kunkle, who co-leads the Post unit of the Washington-Baltimore Newspaper Guild.

Nobody goes into journalism to get rich, Post workers said, but neither do they want to work at jobs without good health care, good pay or retirement benefits. Bezos, who has a personal fortune of more than $26 billion, wants to lower the employer match to workers’ 401K to 1% and to drastically reduce severance pay for laid off workers.