Walmart delays opening stores because of actions of community activist!

Last weekend Walmart announced that it will delay opening six stores in the District of Columbia. Walmart spokesman Steven Restivo told the Washington Post that “we’re using the extra time to further engage with the neighborhoods that surround our stores and build even more support for Walmart,”. 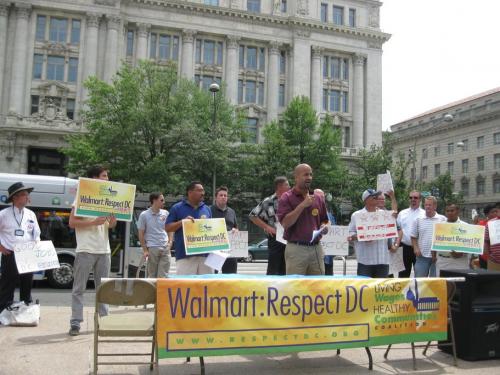 Walmart, which had originally planned to open four stores by the end of the year, now says the first store – most likely at the corner at Georgia and Missouri avenues in Northwest – won’t open until late 2013, with the others in 2014 and beyond.“Walmart would not be altering its original timeline if company executives did not believe it needed more time to convince District residents that low-wage poverty jobs that can force workers to rely on public assistance are what D.C. needs,” said Dyana Forester of Respect DC. The Respect DC Coalition has been pushing the big-box retailer to sign a legally binding Community Benefits Agreement (CBA). If you would like more information on how you can become involved in the Respect DC campaign visit www.respectdc.org or click on the Walmart:Respect DC icon on our website.