Wage Theft in the Spotlight at DC Council 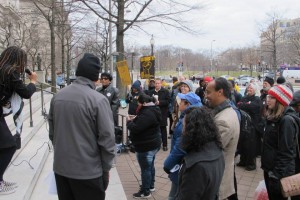 Nikki Lewis, DC Jobs with Justice Executive Director, gets the crowd fired up before 9am with a “No…More…Wage…Theft” call and response.

Cold weather didn’t stop over 75 people from showing up on the steps of the City Council on Friday morning for a rally calling for an end to wage theft in the District and the passage of new legislation to tackle the issue.  The crowd gathered with signs and “No Wage Theft” stickers at 8:30 AM before the scheduled committee hearing on the Wage Theft Prevention Act of 2014.  The bill, co-introduced by Councilmembers Orange (At- large), Cheh (Ward 4), and Graham (Ward 1) with a number of co-sponsors, will create better protections for workers that speak out for their rights, as well as create a mechanism for issuing enforceable judgements at the Office of Wage-Hour that can result in penalties for employers that repeatedly break the law.

Community members shared their moving stories and demanded and end to wage theft during the rally outside before the committee hearing.  Beyond explaining that people should be paid fairly for the work they do, speakers also adamantly stated that wage theft is an issue that hurt everyone.  By not penalizing employers that break the law, business that do the right are at a competitive disadvantage, since not paying workers effectively becomes an interest-free loan. 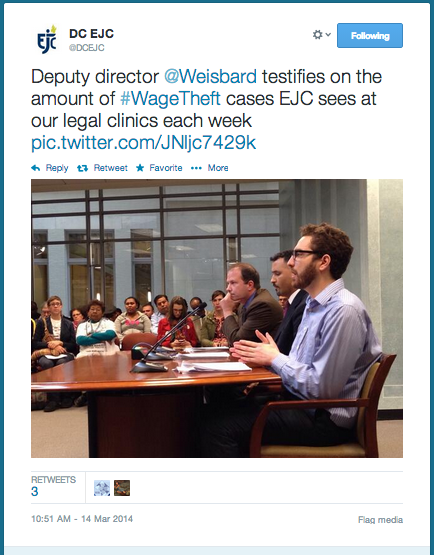 Ari Weissbard, Director of the Employment Justice Center, explained in his testimony that DC received an F on a recent study as a result of how widespread wage theft is in the city.  “A worker is more likely to be robbed by their employer than they are  on the street or at home.”  Yet, while there are channels to receive renumeration for most theft and penalties against those who steal, the same is not true for wage theft.  As many community members testified, trying to recover their hard-earned wages can sometimes require months of waiting without any guarantee that the employer will not repeat the offense.  Weissbard explained that the new Wage Theft Prevention Act of 2014, is an important step to protecting these workers. 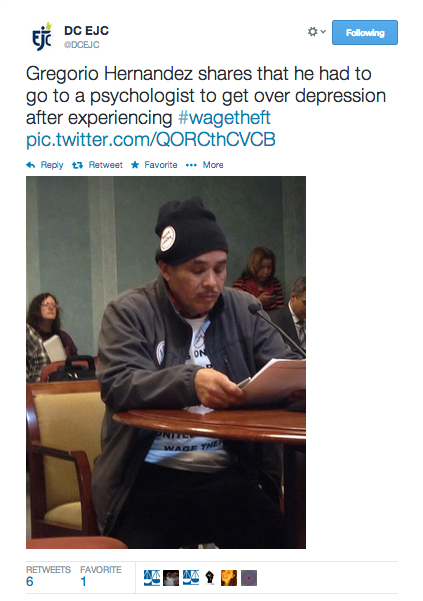 In addition to hearing from advocates from various organizations fighting wage theft in the District, the audience also had the chance to hear from over 20 community members that had experienced wage theft firsthand.  Jose Alvarado and Asdrubal Mencia, members of Trabajadores Unidos of DC, spoke eloquently about the severity of the problem facing the day labor community in DC.  Members of the Restaurant Opportunity Center (ROC) DC conveyed how wage theft occurs in the restaurant industry, while Good Jobs Nation activists spoke of wage theft occurring in federal buildings such as the Ronald Reagan Building across the street from the City Council.  In addition, a number of worker activists from the Employment Justice Centers’ legal clinic spoke about the effects of wage theft on their lives.  Jonny Castillo, for example, explained how wage theft forced him to borrow money in order to continue meeting his bill payments.  Others, like Gregorio Hernandez, spoke of the painful emotional effects that they and their families had to suffer as a result of the realities of wage theft. 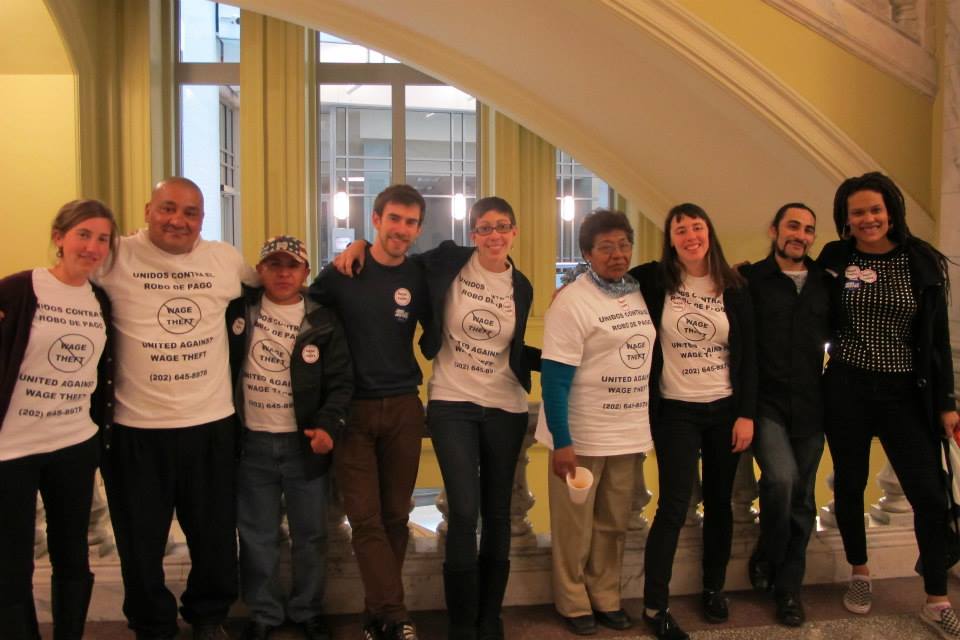 DC Jobs with Justice celebrates after the hearing with some EJC worker activists!

The final testimony came from Tom Luparello, Interim Director of the Department of Employment Services.  Luparello indicated that he had read the bill and was supportive of the changes, citing the need for more resources and authority to effectively combat wage theft in the District.  After the testimony, councilmember Orange congratulated worker activists for speaking out and expressed enthusiasm that the bill seemed to have sufficiently support to move quickly.