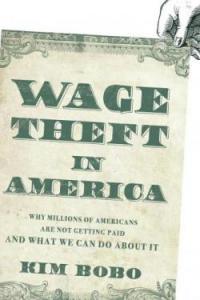 This week Interfaith Worker Justice founder and director Kim Bobo launches her new book, “Wage Theft in America,” which examines the crime wave no one talks about — how billions of dollars worth of wages are stolen from millions of workers in the United States every year. We interviewed her to find out more:

DC JwJ: What motivated you to write a book about wage theft?

Kim Bobo: Interfaith Worker Justice supports a network of 20 workers centers places where workers who are having problems in their workplaces and are not represented by unions can learn about their rights in the workplace and can join with others to address their problems. The number one issue the workers centers deal with is wage theft workers not getting paid for all their work. I became aware of the breadth of the problem through the workers centers.

I also became aware of how frustrated the workers centers were with the Department of Labor’s lack of responsiveness to the problems reported by workers centers and the seeming inability or unwillingness of the DOL leadership to adequately address the crisis of wage theft. rnrnInitially, I planned to write a short monograph offering a new vision for the Department of Labor, but as I began writing I realized that I had to explain why we needed a new vision for the Department of Labor. I started by explaining the crisis of wage theft; then some of my colleagues wanted me to explain how and why wage theft occurs. Pretty soon I had a whole book on wage theft.

DC JwJ: The Washington Lawyers’Committee for Civil Rights recently released a report on contingent workers in DC, and found that 62 percent of day laborers have not been paid for their work at some point. Is this unique, or would we see the same pattern in many other places?

KB: Every survey of day laborers I’ve seen shows similar patterns. Day laborers are shorted hours, paid less than minimum wage, driven to a worksite and left without transportation home, and not paid at all. It is scandalous that individuals and companies would take advantage of day laborers.

DC JwJ: What is the most shocking thing you discovered in researching and writing Wage Theft in America?

KB: It is hard to know where to begin on what is the most shocking thing there were so many. Here are some of the worst:rnrn* How widespread the problem of wage theft is. Millions of employers are stealing billions of dollars from workers each year.

* How few federal enforcement staff people are assigned to police our nation’s workforce. There are fewer than 750 enforcement staff to protect 130 million workers in 7 million workplaces. The Wage and Hour Division of the DOL has fewer than half as many enforcement staff today as it did in 1941 and it does half as many investigative actions as it did then, when it was responsible for only 15.5 million workers. There arenâ€™t enough cops on the job.rnrn* How many private lawsuits there are on wage theft. Every week there are new wage theft settlements reported in the newspaper. My book has a huge appendix listing private lawsuit settlements on wage theft.rnrn

* How few people understand the crisis of wage theft. As I worked on the book, I talked with hundreds of friends and neighbors about the crisis. The first question people ask is, â€œWhat is wage theft?â€ The second is, â€œHow does this happen? Almost everyone knows someone who has been shorted wages, not paid overtime, misclassified as an independent contractor, or had wages stolen in some other fashion â€” yet seldom do people understand that these are not isolated problems but rather society-wide in scope.

DC JwJ: With new national leaders coming into office, what would you like to see done at a national level to address the issue of wage theft?

KB: The new Secretary of Labor and the new Wage and Hour Administrator must make stopping and deterring wage theft a priority for the agency. Compared to many of the problems facing our nation, this is a relatively easy one to address, but it will require leadership. The new leadership must:rnrn* talk with the American people and with the country’s ethical business community about the crisis of wage theft;rnrn* punish those who steal wages in meaningful ways;rnrn* increase staffing levels for enforcement’s impossible for 750 enforcement staff to adequately protect 130 million workers;rnrn* work cooperatively with workers centers, unions, employment lawyers, law school clinics, ethical business coalitions and others who could help stop wage theft.

DC JwJ: Do you have any advice for local activists looking to fight wage theft in our communities?

KB: Absolutely. Get my book and read it â€” there are lots of concrete suggestion in it. The book can be purchased at www.iwj.org or at Busboys and Poets in Washington (www.busboysandpoets.com) and can be pre-ordered at Amazon.com. In addition you can:rnrn* Support and volunteer at local workers centers such as the DC Employment Justice Center (www.dcejc.org), Casa de Maryland (www.casademaryland.org) and Tenants and Workers United in Alexandria (www.tenantsworkers.org).

* Join and work with DC Jobs with Justice, which connects people with the campaigns of these workers centers as well as local union campaigns that help stop wage theft.rnrn* Organize a study/discussion of the book using the Congregational Study Guide (included as an appendix in the book and also available at www.iwj.org).

Kim Bobo is the founder and executive director of Interfaith Worker Justice (www.iwj.org) and a columnist for the online magazine Religion Dispatches (www.religiondispatches.org). She is the co-author of Organizing for Social Change, the most widely-used manual on progressive activism in the U.S. In July, she gave congressional testimony on the Department of Labor’s failure to deal with wage theft, which can be seen at www.youtube.com/watch?v=bmxlvUIEng4.

Kim will be in Washington this week to discuss her book at the following venues:

All events free and open to the public.