From December: Victories on Minimum Wage and Paid Sick Days

In case you missed it: DC Jobs with Justice, Respect DC and a large, diverse coalition of workers, community organizations, labor unions, faith groups, and businesses won two historic victories for workers’ rights in the District. After years of pushing for living wages for all workers (and specifically at Walmart) and expanding paid sick days to all workers, both campaigns came to an sudden, successful end in December of 2013. 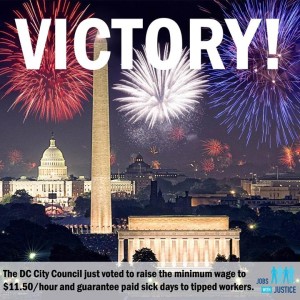 Starting in July of this year, the DC minimum wage will climb annually until it reaches $11.50 per hour, and will rise with the cost of living thereafter. And several years after DC became one of the first jurisdictions in the country to pass a paid sick leave law, the Paid Sick Days campaign was able to remove several exclusionary loopholes. What a way to end the year for working families in the District! Stay tuned for more updates as we ensure these laws get funded, go properly enforced, and become public knowledge.

See here for an in-depth look at what these two bills offer for workers, courtesy of the DC Employment Justice Center.