Verizon workers all over the country rallied in a national day of action on March 22nd. That morning, from 7am to 9am, DC Jobs with Justice joined with representatives of the AFL-CIO, the DC Metro Labor Council and CWA local 2108 at the Verizon worksite called the Chesapeake in Silver Spring, Maryland. 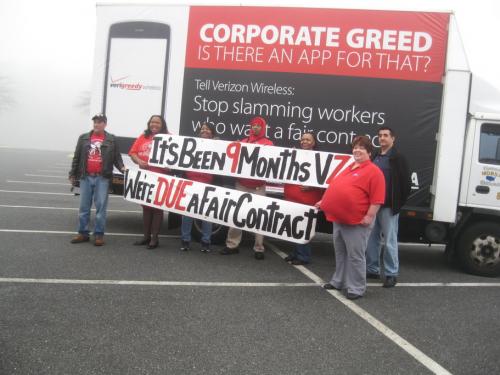 The worksite is located near route 29, which is a major commuter route. Attendees dressed as pregnant people line both sides of route 29 with signs that said, “Verizon is having labor pains”. And “It’s been 9 months, a contract is due”. Many people stopped, took pictures, and honked their horns in solidarity.rnrnIn the afternoon from 4pm to 5:30pm, DC JWJ joined with LIUNA, APALA-DC, USW, CLUW, STITCH, Occupy DC, SOME, CWA 2336 and other local organizations for a march from Verizon lobbyist offices to the Verizon center. Jos Williams from the DC Metro Labor Council,Isaiah Toney from the Progressive Student Union at George Washington University, and CWA member Jose Cruz from Local 2336 opened the rally. The marchers proceeded through the streets chanting, “What do want? A contract. 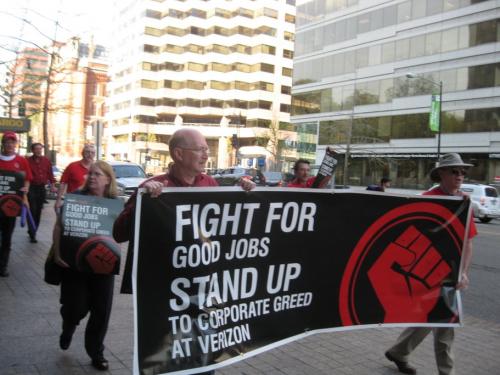 When do we want it? Now”. The rally ended with an inspirational speech from CWA President Larry Cohen about how we will continue to fight to make sure the workers get a fair contract. rnrnIf you have more questions about DC Jobs with Justice role in the Verizon campaign,or would like to get involved, please contact Lillian at Lillian@dcjwj.org or 202-543-1542.