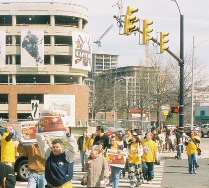 As part of the National Student Labor Week of Action, more than 100 student, community, and labor activists led a March for Fair Food to demand respect for workers’ rights. The March 31st event kicked off with a rally at the Ballston Metro in Northern Virgina, where Rev. Graylan Hagler of Ministers for Racial and Economic Justice spoke about the abuse Smithfield workers face. The crowd then marched to a nearby Starbucks, where members of the IWW spoke of low pay and benefits for baristas and Starbuck’s disrespect for Ethiopian coffee growers who produce some of their most popular and profitable beans. When the marchers reached the Harris Teeter store on Glebe Road, they were greeted by a crowd of Northern Virginia labor activists, including three county supervisors who were there to speak in support of the action. A delegation of seven faith and community leaders, led by Rev. David Denham of Bethel UCC, went into the store to ask Harris Teeter to take Smithfield products off their shelves. The march — which NoVa CLC President Dan Duncan says had "great energy" — ended at McDonald’s, where student activists spoke about the conditions faced by tomato pickers in Florida and the efforts by the Coalition of Immokalee Workers to organize for better pay and dignified work conditions.rn