Serving Up The Truth About Sexual Harassment, With A Side of Commonsense 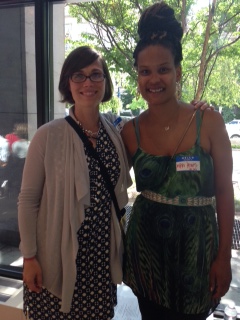 Nikki and Liz Watson from NWLC

What do you call the person who can make you stay late at work, who decides who works the night shift and who works days, who works the cash register and who cleans the toilets? You call that person the boss. But exactly one year ago today, the Supreme Court said that if the person who directs your daily work harasses you, unless they also have the power to hire and fire you, the strong protections that are supposed to kick in when bosses harass their subordinates do not apply.

Right about now, you might be scratching your head thinking that this doesn’t make any sense. And you would be right. But let us explain how we ended up with this terrible rule and what can be done about it.

More than 15 years ago, recognizing the potential for bosses to abuse their power over their subordinates and that employers should be responsible for preventing this abuse, the Supreme Court put in place strong legal protections from this harassment. Then last year, a narrow 5-4 decision in Vance v. Ball State University undercut those protections by saying they only apply to harassment by bosses who also have the power to take actions like hiring or firing. The Vance decision held that the person who tells you when to show up at work and what to do when you get there is just another coworker. This means that claims of harassment by the person who directs your daily work but can’t hire and fire you are evaluated under the much tougher legal standard that applies to claims of coworker harassment. As a result, it is now much harder for workers harassed by those who direct their daily work to have their day in court.

Nikki knows firsthand what harassment by a boss who directs your daily work feels like. As a teenager she worked in a restaurant where she reported to an assistant manager who harassed her and many of the other teenage girls on the job. He dry humped her coworker’s leg, stared at Nikki while licking his lips, and posted lists of who had the “best” breasts and butts. He repeatedly bugged Nikki to meet up with him after work to drink and party, and told her that he loved her. When it dawned on him that Nikki was rejecting his advances, he retaliated against her by routinely assigning extra tasks that required her to stay late and making sure he was nowhere to be found when it was time for him to sign her time slip so that she could clock out.

Nikki’s assistant manager had plenty of power over the workers who reported to him. Although he didn’t have the power to hire and fire them, he could make their lives harder by giving them worse schedules, assigning them worse sections of the restaurant, and making them stay late to do extra work.

But the Vance decision leaves workers who report to bosses like Nikki’s – who direct their daily work but do not have the power to hire and fire – with watered down protections from harassment.

By one estimate, approximately a quarter of workers get their start in the restaurant industry. We both did. And in many of the restaurants where we worked, harassment felt like an accepted part of the workplace culture. When workers start out exposed to harassment on the job, it can influence what they think they have to put up with at work for a very long time.

And restaurants are just one of many work environments in which harassment is still commonplace. One quarter of women and ten percent of men overall report having experienced harassment.

As a new report out earlier this year from the National Women’s Law Center shows, in our nation’s workplaces there are more than six million lower-level supervisors – bosses who direct employee’s daily work but who do not have the power to hire and fire. And more than half of them are overseeing low-wage workers. Workers need strong protections from the potential abuse of power by these bosses.

Fortunately there is a commonsense solution. The Fair Employment Protection Act – introduced in Congress this past March – would make clear that the protections against harassment by a superior extend to harassment both by bosses who have the power to take actions like hiring and firing and those who have the authority to direct daily work.

When workers who have experienced harassment on the job come forward to report it, they are putting their jobs on the line. Those who do take that brave step deserve to have the law on their side.