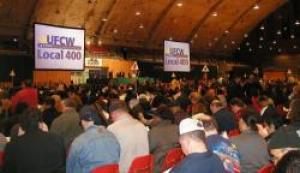 Today, nearly 20,000 grocery store workers, from DC to Baltimore, won raises, affordable health care and pensions. The contract, approved overwhelmingly by Safeway and Giant employees, provides significant wage increases that will total $2.82 an hour over the life of the contract for the 70% of the workers who are at the top of the wage scale. Starting wages for new hires have also increased, with an accelerated pay scale so the new workers can earn more, faster. rnrnAmong the company proposals defeated by the union was a 10% benefits co-pay for existing employees, a 25% co-pay hike for retirees and the elimination of holiday and Sunday premium wages. Employees hired on or after March 30th 2008, however, will have to pay $5 per week towards their benefits. In addition, Safeway and Giant stores will now be able to offer a monetary buyout to their most senior employees under the condition that the offer is purely voluntary and without any threat of layoff if the employee rejects it. rnrn 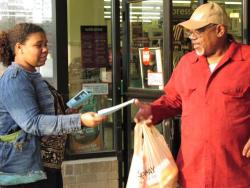 Without your support and that of hundreds of others who organized actions throughout the metro area in the last 2 weeks, Local 400 would not have been able to defeat the endless list of company demands. â€œIf it had not been for all the hard work you and the JwJ [Jobs with Justice] membership put in, I know that it would not have happened,â€ said Mikki Harris, Civil Rights and Community Affairs coordinator for UFCW Local 400. â€œThe actions, the support cards, letter writing campaigns, the support at the ministers press conference, the interviews on the radio and news, I can go on and on and on. I just cannot find enough words to let you know how much I appreciate you. I’ll start with these to simple words. Thank You. Peace and Blessings. And Remember, Solidarity Forever. â€rnrnCheck out the photos of supermarket actions organized by our members throughout the city!rnrnFor more details about the contract ratification, read the following stories:rnrnUnion Reaches Deal with Safeway, GiantrnrnrnSupermarket Workers OK Contractrn rnrnGrocery Worker to Vote on ContractrnrnrnGiant, Safway Workers threaten to strikernrnGrocery Union Makes Push for Public SupportrnrnSafeway Employees Approve Labor Contract