On April 21st, the Living Wages Healthy Communities coalition held a press conference outside Walmart’s DC office in Chinatown to demand that they put their promises in writing by signing an enforceable Community Benefits Agreement. rnrn“Walmart’s wages are pathetic,” said Ernestine Bassett, a DC resident and cashier worker at a Laurel, MD Walmart for over four years. “I started at $9.50 per hour, and after four years I’m up to $10.70 per hour. You can’t raise a family on what Walmart pays.” rnrnThe 70 demonstrators heard from speakers from a broad range of community organizations, including the DC Jobs Council, Wider Opportunities for Women, the Re-Entry Network for Returning Citizens and several local churches, who are part of the city-wide coalition that has been demanding that Wal-Mart negotiate a binding citywide agreement with Wal-Mart to “provide enforceable community benefits,” if the global retailer expands to DC. rnrn 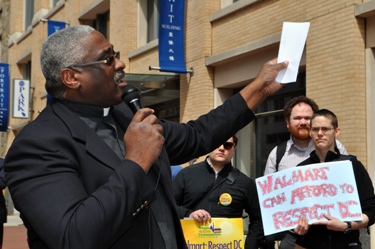 “If they are coming into DC, then everything they’ve promised needs to be put in writing,” added Bassett. When coalition members asked to visit Walmart’s office, building security said that no one was available to meet with them. “It’s amazing when someone says and promises they want to be a good neighbor, but never actually wants to meet their neighbor,” said Rev. Jarvis Johnson, co-pastor of the New Prospect Family Praise and Worship Center in DC. “We came this time with an olive branch, but we’re not willing to be stepped on, we’re not willing to be crucified, and we will be back.” Rev. Johnson read the community agreement into a microphone directed at Walmart’s office, saying “We’re willing to work with you if you’re willing to come in with respect.” He added, “We’re willing to be an ally, a neighbor and a partner, but do not assume that we are ready to roll over and take anything; we’re not willing to be disrespected, disenfranchised, victims.” rnrnAmong other items, the community agreement seeks to enforce full-time, living wage jobs; that Walmart pay its fair share of taxes; that the company make local hiring and training commitments targeted to DC residents; provide protection for residents and small businesses; offer fairness in hiring rehabilitated ex-offenders; give equal pay for all workers regardless of gender or race; and adhere to ‘green’ building standards. – report/photos by Adam Wright