Coalition says developer does not deserve Developer of the Year Award when their projects are harming communities and displacing residents.

WASHINGTON, D.C., October 24 – Calling for an end to development that has been bringing low wage, part time jobs and displacing longtime residents, Respect DC rallied at noon today outside the Wardman Park Marriott in DC where the JBG Companies were receiving the “Developer of the Year” award from NAIOP, the Commercial Real Estate Development Association, at their annual meeting, which costs over $1000/per person to attend. 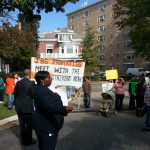 “Developers should not be rewarded for displacing residents and bringing jobs that make it impossible to live in the area and support a family,” said Mike Wilson, with DC Jobs with Justice. “DC and the region need more affordable housing, and jobs that allow people to work full time for a living wage. Fighting to stop the First Source hiring law, bringing a low wage employer like Walmart, and replacing affordable housing units with luxury condos and hotels, only harms our community.”

Respect DC is calling on JBG to bring Walmart to the table with community groups and sign a Community Benefits Agreement before they move forward on any projects with the retailer. They also demand that JBG, which sits on the board of the Associated Builders and Contractors, the group suing the DC government over the recently strengthened First Source Hiring Law, call on ABC to drop the law suit. In addition, they joined with Tenants and Workers United in calling on JBG to preserve affordable housing and not displace more than 2,000 working families residing the Beauregard redevelopment zone in Alexandria, Virginia.

“JBG has totally failed in the area of community engagement when it comes to working with the existing and resident, community, and business, stakeholders on their development plans,” said Commissioner Keith Silver, who represents the area where JBG is planning to build a Walmart in Ward 6, “they are not hiring local residents to work on the project, and they have not engaged us in any meaningful dialog about the kind of development we would like to see in our neighborhood. The proposed location in my ANC is nothing more than a developer driven, sweetheart deal struck with the executive and legislative branches of the city government. Our collective community and our city deserve better.”

Those attending the rally encouraged people visiting the hotel and passing by on Connecticut Ave to contact the JBG Companies directly to tell them that DC, and the region, does not want the kind of development that displaces longtime residents, destroys affordable housing, and creates poverty jobs.