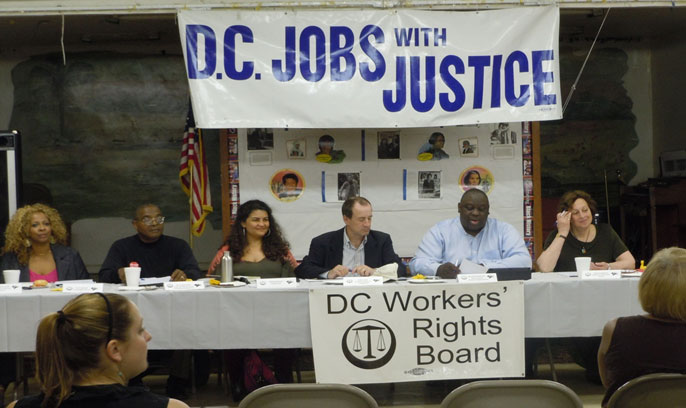 Local community leaders on the Workers’ Rights Board investigate and publicize issues of economic justice in Washington, DC.

Why was the Workers’ Rights Board created?
Jobs with Justice originally created Workers’ Rights Boards to combat the lack of an adequate legal framework to support workers’ rights. Our Board in Washington, DC is one of over two dozen Boards across the country. Although it has no legal authority, the Boards can produce real results.

In December of 2001, the Board came together again to investigate the effect of September 11 on the tourism and hospitality industry and to call on our public officials to do more to aid workers laid off as a result of a drop in travel and tourism.

During the summer of 2002, the Board held its third hearing, investigating the exploitation of immigrant workers. The hearing focused on the abuses perpetrated by a local lawn services firm with a contract to maintain the city’s parks, playing fields and recreation areas. Since then, the Board has been engaged in pushing the District to review the process by which the Office of Contracting and Procurement grants contracts and follows up on complaints about the labor practices of its contractors.

A March of 2004 hearing brought together union members and community activists to discuss the various facets of the Health Care Crisis in DC, from the failure of employers to provide benefits, to difficulty the uninsured face in finding care, to the rising cost of prescription drugs for seniors.

In June 2006 and 2007, the Workers’ Rights Board convened to investigate the gap between economic growth and unemployment in DC, addressing the question of how to get more DC residents into Good Jobs. This hearing helped to kick-off the successful DC Living Wage campaign.

In the fall of 2008, the Board heald a hearing on privatization and the attack on public services and public employees in DC.

In response to dozens of reports from local workers that employers have stolen all or part of their wages, on February 2010, the Board held a hearing on the issue of Wage Theft.

In May 2012, the Workers’ Rights Board held a hearing on the issues and concerns facing women workers in the District.