Washington, DC – Yesterday, the DC Office of Attorney General brought suit against Power Design, Inc. (Power Design) and two subcontractors for stealing wages from over 500 workers in Washington, DC. (Read full complaint.) DC Jobs With Justice applauds the OAG for their work heeding the calls of community groups to investigate Power Design, which has a history of noncompliance with labor laws in the region and around the country.

DC Jobs With Justice, in collaboration with community groups and labor unions, advocates for better enforcement of DC’s labor laws including sick and safe days, minimum wage, misclassification and overtime. The suit brought by OAG accuses Power Design of violations in each of these areas as well as failure to pay local taxes. DC Jobs With Justice highlighted concerns about Power Design’s labor practices with a rally at the controversial Line Hotel development which received a large tax break, and at the many sites near Nationals Park on May Day (May 1, 2018).

Elizabeth Falcon, Executive Director of DC Jobs With Justice, states, “I am pleased to see the Attorney General and his office take seriously the concerns of community organizations and share our vision that Power Design and companies that prey on District workers are held to account. This lawsuit serves the 535 workers who have been cheated of wages by Power Design and sends a clear message that wage theft will not be tolerated in the District.”

Making Our Laws Real, published by DC Jobs With Justice and the Just Pay Coalition this year, recommends that enforcement agencies like OAG target high profile cases which can have an impact across a key industry, that they utilize joint liability, and that they publicize such cases. The suit against Power Design does just that. Construction is one of the five areas that the DC Department of Employment Services identifies as high risk for wage violations. 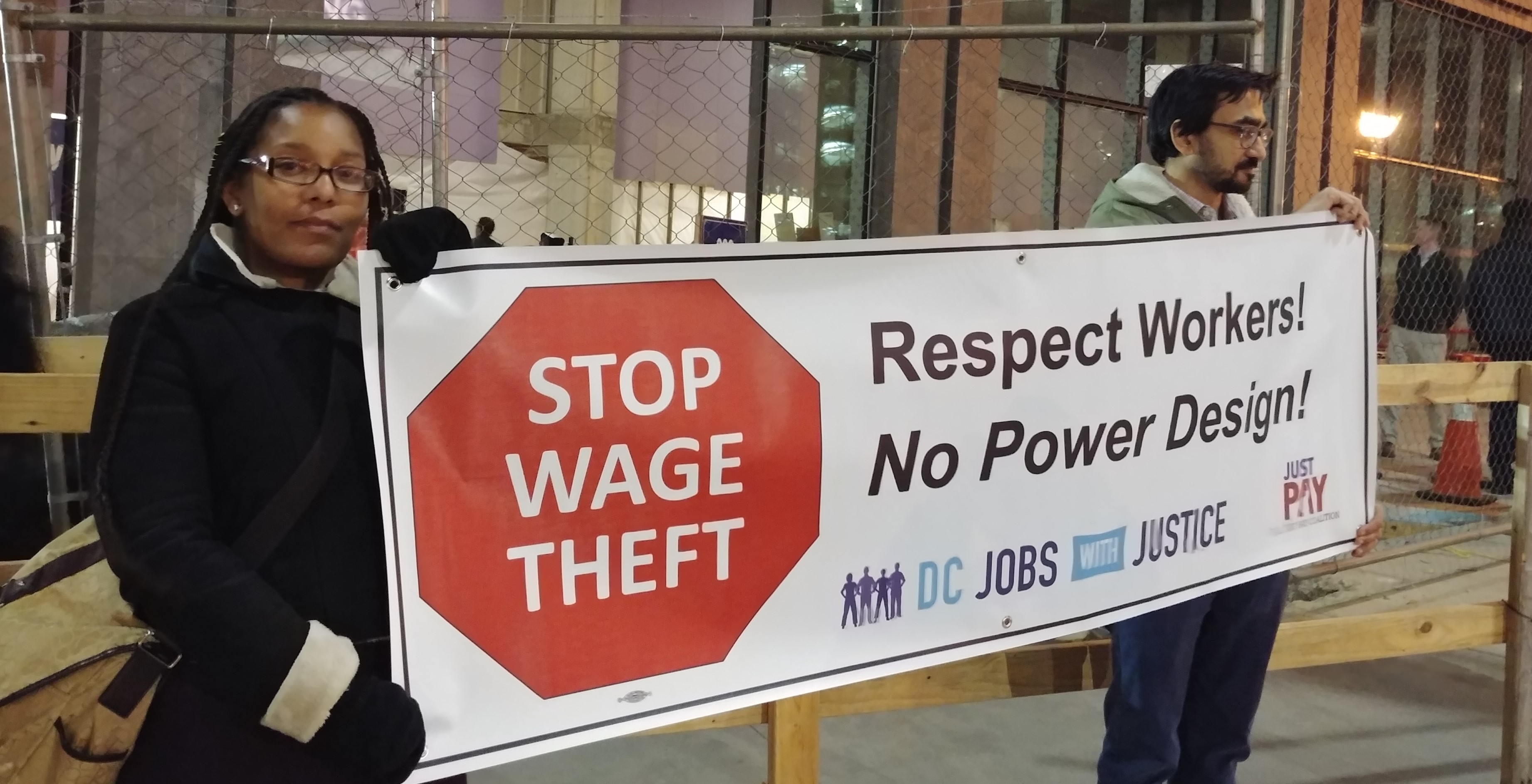 Power Design relies on unlicensed labor brokers and misclassified workers to perform everything but the managerial duties on a worksite. Even though the company outfits workers in Power Design equipment, directs their work, and disciplines them, workers on Power Design job sites are misclassified as independent contractors and paid in cash or personal check by the labor broker. These practices are well documented in lawsuits from both DC and nationally. This is an apparent violation of the D.C. Workplace Fraud Act (2013) which dictates that a worker may only be classified as an independent contractor if they completely control how they perform the services and the entity who has hired them only specifies the end result, the worker is in an “an independently established trade,” and “the work is outside of the usual course of business of the employer for whom the work is performed.” Through this scheme, Power Design can avoid federal and local taxes, unemployment insurance taxes, workers compensation insurance, and other labor laws, and outsource their liability. Worker, many of whom do not have papers, speak fluent English, or know their rights under labor law, are lacking in protections and rights that they would otherwise have. In turn, general contractors and developers have come to rely on Power Design’s artificially low bids and thus entrenched this “race-to-the-bottom” strategy by awarding Power Design plum contracts on projects throughout the District.

Ariel Ladima from Puerto Rico lives in Clinton, Maryland. He worked directly for Power Design as as an electrician for one year. Ariel made $30/hour and stresses that he personally was never treated poorly but that he saw firsthand the company’s scheme of using under-trained and exploited workers hired by labor brokers to do electrical work.