On Tuesday, March 4th in front of a packed and tense audience of over 100 people, the DC Council voted unanimously to pass the Accrued Sick and Safe Days Act of 2007. The vote makes DC only the second city in the country to have a paid sick days law, and the first to provide paid time off to victims of domestic violence, stalking, and sexual assault. rnrnUnder the new law, full-time workers at businesses with over 100 employees will earn 7 days a year to take care of their own health, the health of family members, or address a domestic violence situation. Workers at businesses with 25-99 employees will earn 5 days, and workers at businesses of 24 or fewer will earn 3 days. Part-time workers will earn paid time on a pro-rated basis. rnrn 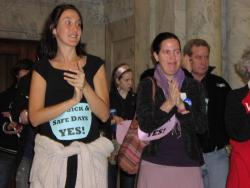 While winning this groundbreaking bill over huge opposition was a big victory, we also suffered some losses: rnrn*By a 7-6 vote, the Council approved a change that says workers have to be at a job for a full year or 1,000 hours before earning paid sick time. This will especially hurt young workers, workers in high-turnover service sector jobs, and people re-entering the workforce, such as ex-offenders and TANF recipients. Councilmembers Vincent Gray, David Catania and Jack Evans pushed through this change, and Councilmembers Harry Thomas, Mary Cheh, Kwame Brown and Yvette Alexander voted in support.rnrn 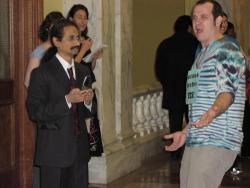 *The Council denied sick and safe days to several categories of workers, including tipped restaurant workers, health care workers in “premium pay programs”, and students employed through University work-study programs.rnrn*The law will also allow businesses to apply for an exemption if they can prove hardship.rn 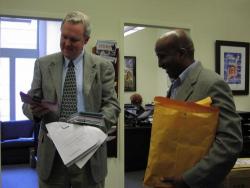 In the months leading up to the vote, supporters reached out to workers all over DC, collected hundreds of postcards and letters, mobilized dozens of people for lobby days, ran a creative ad campaign, produced reports and analysis, appeared on radio shows, leafletted, postered, and bombarded the Council with emails on a bi-monthly basis. rn 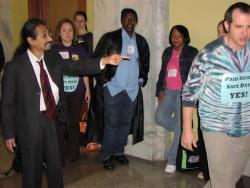 The morning of the vote, over 100 supporters packed into the Wilson Building, coloring the hallways blue and purple (the colors of the paid sick and safe campaign). Activists shared stickers and signs and street theater performances kept the crowd energized before entering the Council Chamber for the vote. rn 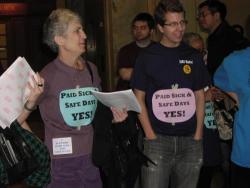 Those present at the vote represented the diversity of the organizations supporting the bill: janitors and security officers with SEIU Local 32BJ alongside members of the Coalition Against Domestic Violence, Co-op America Worker Members next to Working America staff, Georgetown and American University students and Jews United for Justice members, hotel workers from UNITE HERE Local 25 with homeless advocates from So Others Might Eat, Bread for the City, and Washington Legal Clinic for the Homeless.rnrn 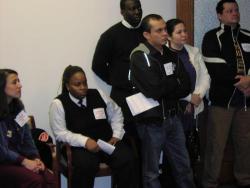