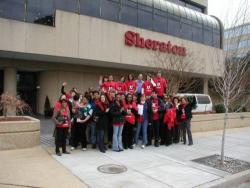 Workers at the Sheraton Crystal City hotel publicly launched their fight for justice last Thursday with a delegation to the general manager asking for a fair and democratic process for deciding whether to form a union, without management interference.rnrnA dozen workers from the Sheraton were joined by union hotel workers from other area hotels, along with community allies, including Jacob Feinspan of Jews United for Justice, Ruth Castel-Branco and Ramon Zepeda from DC Jobs with Justice, and faith and labor leaders from Northern Virginia. rnrn”Workers at this hotel struggle under difficult working conditions,” Feinspan observed. “Room cleaners have been required to clean as many as 32 rooms a day–an unreasonable burden that results in injuries and requires workers to skip needed breaks to complete their assigned work.”rnrnFelipe Alvare, a dishwasher at the Sheraton who participated in the delegation, shared what the action meant to him: rn”I’ve worked at this hotel for 14 years. My co-workers and I work hard. We don’t get paid a lot — $9.50 is not a lot to live on. Often I am the only dishwasher in the entire hotel, and the only person in charge of cleaning the kitchen. We just want HEI to treat us fairly – starting with some respect. That’s the message we delivered today.” rn