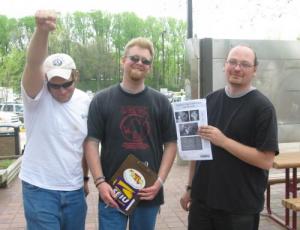 Montgomery College students, adjunct professors and members of the DC Student Labor Action Project participated in a “Lunch with Adjuncts” day on Weds, March 23rd. The event raised awareness about the struggle by part-time faculty to form a union, and provided outreach for an upcoming action at the Montgomery College Board of Trustees meeting on April 28. Student organizers added over 400 signatures to their petition supporting the adjunct’s right to organize. rnrnAdjuncts have been organizing with SEIU Local 500 to improve low wages and benefits; Local 500 successfullyrnorganized adjuncts at GW and won 40% pay raises and job security in their new contract. Negotiations for a union election at Montgomery College are in progress and an election date — which the adjuncts feel sure they’ll win — will be announced soon.rnrnThe lunch event “was a clear example of strong student support for worker’s power,” Montgomery student Seth Dietz told UNION CITY, “The adjuncts can’t lose with the students behind them.”rnrn- reported by Andrew Dobbyn, DC SLAP Internrn