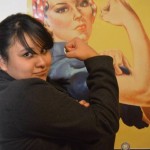 Yanely Perez is a rising sophomore at Georgetown University. She is majoring in Government and Psychology with a minor in German. She is originally from Covadonga, Guanajuato, Mexico but she moved with her family in 2000 to Oklahoma. Throughout her school career and in her personal time she has helped with issues pertaining directly to the homeless population and animal rights. Because her family has a long history of immigrant workers she has found a passion advocating for workers rights. What she has to say about her decision to join DCJWJ: “I feel like I have so much to learn about some of the serious issues affecting DC and I believe DC JWJ will help me not only become more informed but also channel that information into action. The staff at DCJWJ is great and their work is really creating change. I can’t wait to get started!”

Marisha Wickremsinhe hails from Indianapolis, Indiana, the twelfth largest city in the country. She is a rising senior at Georgetown University, studying International Health. Her interest in organizing grew out of a commitment to the public education system in Washington – after the Spring 2013 school closings slated to occur in the District, several schools were able to advocate that they remain open. Organizing efforts on the part of students, parents, teachers, and neighborhoods proved effective, but the influence of distinct racial and socioeconomic lines was glaring. In that Fall of 2013, Marisha worked as a DC JwJ Intern, and was blessed to attend the National JwJ Organizing Training in October. It was INCREDIBLE. Marisha became invested in organizing as a powerful and fundamental tool of social change, and hopes to learn the landscape of organizing for workers’ rights in DC. Also, Nikki, Ari, and Maxwell are awesome.