Making the Dream City: Organizing for Local Justice in 2007

By Andrew Willis Garces, in consultation with many others 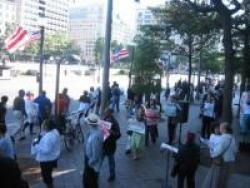 IN THE SMALL second-floor conference room above the takeout place, or in somebody’s living room, a church basement, the stoop of an apartment building, that’s where you’ll find them, sipping cups of tea to fight off the November chill. Mothers, grandmothers, great-granddaughters. Childcare providers, students, retirees, teachers, videographers, office workers, chefs, folks between jobs. They’ve lived here all their lives, or seventeen years, or only six months. Their families arrived long ago from South Carolina, El Salvador, Lebanon, Ethiopia, settling in Bellevue, Congress Heights, Garfield Terrace, 14th Street Heights, Ivy City. They’re taking notes, sharing meals, debriefing from that meeting with the city official, going over their goals, making phone calls to the folks who signed the petition last week, planning for the Next. Big. Action. Celebrating hard-won victories, and taking note of what they could have done better. These are activists and organizers, people who love DC and have come together to make it better. They’re fighting for workplace dignity, housing justice, safer streets for youth, women and recent immigrants, and stronger neighborhoods. They’re taking action together, and creating opportunities for more and more of us to get involved. 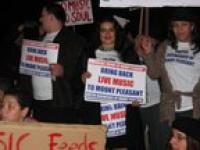 This list is a snapshot of the organizing victories won in 2007 by groups of people working for a concrete change to bring about a more just DC. I put it together, with a lot of help, as a document and a reminder, for all of us who join in struggle, envisioning a District more hospitable to working families, recent immigrants, native Washingtonians who know they have no choice but to take to the streets to claim their right to remain. The list documents the work of groups winning victories through campaigns, or a series of actions taken to achieve a shared goal. It’s only a start – it isn’t comprehensive. I invite others to contribute – posting additions or edits – by writing to willisa [at] gmail [dot] com. Thanks to DC JwJ hosting it here we can keep adding to it.

As a final note, I’m writing this to spotlight groups taking action towards change at the local level. I want to acknowledge there are lots of us also doing good work locally on issues that transcend geography. Like the hundreds of actions taken by residents in support of comprehensive immigration reform, justice for political prisoners and survivors of racist violence and police brutality in the US and abroad, and against war and militarism, to name just a few issues that require local, regional, national and global attention. I hope you’ll take a minute to let me know what you think of all this segmenting, categorizing and disclaiming, and offer up a few suggestions for making it more accessible, comprehensive and fair to folks doing great work. Here’s to a successful 2008 for all of us.

*Andrew is a District resident and organizer with DC JwJ coalition member ONE DC. The analysis presented here does not necessarily reflect the views of DC Jobs with Justice or any of its member organizations.

OUR VICTORIES – Organized by Issue