Today, dozens of members from the Justice at Wings Coalition – a coalition of faith, labor, civil and human rights organizations fighting to protect the labor rights of iron workers at Wings Enterprises – gathered across the main offices of the Smithsonian Institution demanding them to keep Wings off the upcoming National Museum of African American History and Culture.

“We’ll not cease targeting the Smithsonian Institution until there is assurance that Wings Enterprises will not work at the African American Museum,” explained Mr. Ronnell Howard, one of the workers on strike from Wings Enterprises when talking to Linda St. Thomas, a spokesperson from the Smithsonian Institution. “I worked for Wings for four years and regardless of my hard work, Wings underpaid me, owing me over 10 thousand dollars. As an African- American and member of this community, I would be offended if the Smithsonian allows a company with such a bad record build the African American museum.”

At the forefront of the Justice at Wings Coalition are workers who have been on strike from Wings since October 2009, protesting Wings’ history of safety problems, including violations of OSHA regulations; low wages on private projects; violations of laws that mandate good wages on public projects; and retaliation against workers who want to improve conditions; among other issues. 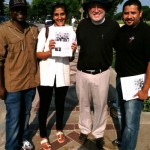 For example, Wings was cited twice by the DC Department of Employment Services (DOES) for Davis-Bacon violations that involved [Wings] apprentices at the Consolidated Forensic Lab Project. Wings has had to pay one apprentice worker, Mr. Ronnell Howard, almost $11,000 in restitution for underpaid Davis-Bacon wages and fringe benefit payments.

Now, Wings is trying to work as a rebar subcontractor at the National Museum of African American History and Culture. The Justice at Wings Coalition approached the Smithsonian Institution and provided them with the binder of evidence showing that Wings has a history of labor and OSHA violations. Their response was simple: we are leaving everything up to our general contractors Clark/Smoot/Russell.

“The response from the Smithsonian Institution is unacceptable and very disappointing,” expressed Jose David Benitez, a worker on strike from Wings. “The Smithsonian owns the project; they have a responsibility.”