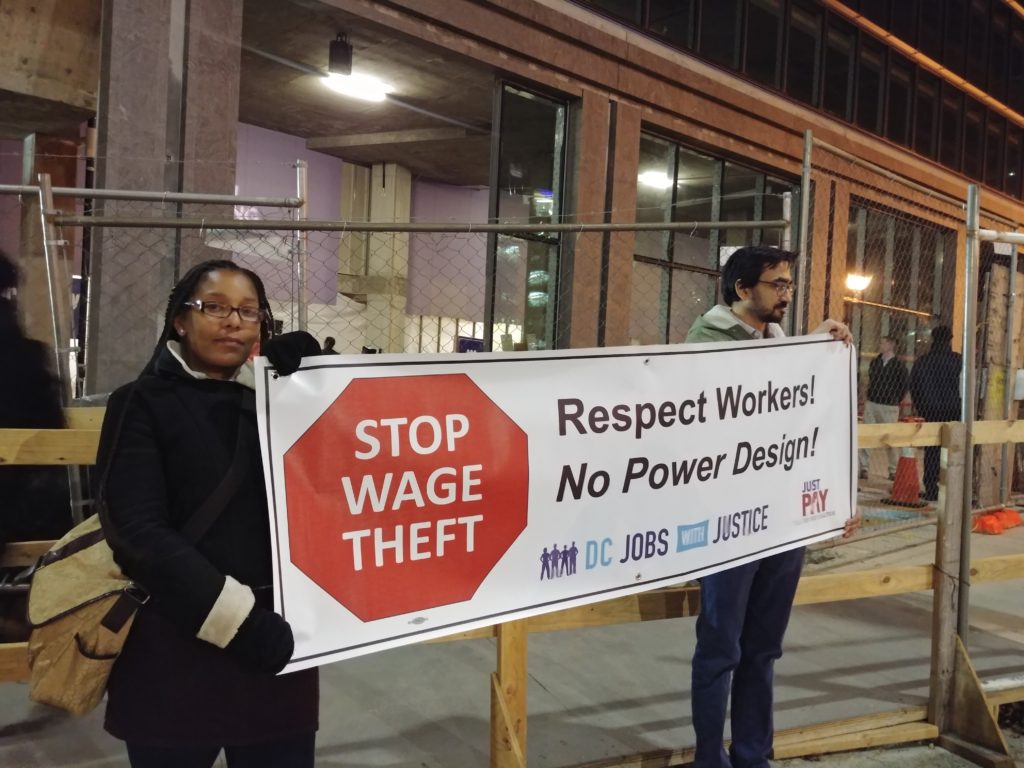 DC Jobs With Justice applauds the Office of the Attorney General for a record settlement on behalf of 500+ workers and the DC government. The $2.75 million settlement with Power Design, Inc is the largest recovery to date in a wage enforcement action for the OAG. This settlement is a victory for workers rights and demonstrates that DC is serious about enforcing laws that protect workers and residents in the District. We are pleased to see that the settlement included $879,056 in restitution for affected workers, penalties, an investment in apprenticeships, and additional compliance measures. We thank the Attorney General for taking seriously the concerns raised by DC Jobs With Justice and others and bringing Power Design into compliance with all local labor laws.
DC Jobs With Justice began sounding the alarm about Power Design’s activities in DC in 2017. Since then we have testified to the DC Council, visited worksites, protested at the Line Hotel (a Power Design site), held a May Day parade, filed complaints with the Board of Industrial Trades, and more. DC has some of the strongest wage theft and misclassification laws in the country. However, without meaningful enforcement, these laws cannot protect workers.

DC JWJ and the Just Pay Coalition have encouraged DC to take on just this kind of enforcement action in our report Making Our Laws Real. By taking on a growing player in an industry with a history of wage violations, the OAG is sending the needed message to contractors working across DC: follow the law or pay the price.

“This settlement should be a wake-up call to District employers: if you cheat workers out of wages and benefits they’ve earned, or commit payroll fraud to gain an unlawful edge, you will be held accountable,” – Attorney General Racine

Thanks to everyone who has helped keep the spotlight on Power Design and joined us in fighting for accountability by District employers! We continue to stand with you in the fight against wage theft and for a District where workers are treated with respect and dignity.