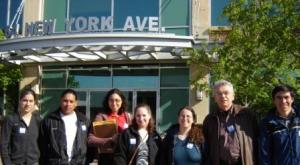 “No matter what has happened in the past, from this day forward we are here to help,” promised Mohammad Sheikh, Assistant Director for Labor Standards at DC’s Department of Employment Services. Sheikh was responding to Jews United for Justice’s action last Friday, when members of JUFJ, along with day laborers from the Union de Trabajadores and organizers from DC Jobs with Justice and OPEIU Local 2 descended on the DC Office of Wage and Hour to demand better protection of workers who are robbed of their wages by employers. rnrnAs the nine-person delegation crowded into their offices, Wage and Hour staff responded quickly. Mohammad R. Sheikh (center), Assistant Director for Labor Standards at the Department of Employment Services, and Pam Banks, Director of the Office of Wage and Hour, came out to meet the group within minutes, ushering them into a conference room for an impromptu meeting. After listening to the group’s concerns, and being presented with more than 130 letters urging the Office of Wage and Hour to use all the tools at their disposal to enforce the rights of workers, Sheikh pledged his support and made a verbal commitment to meet several key demands, including instructing staff to use a wider range of tools in their investigations, giving workers more frequent updates on their cases, and forwarding some cases to the Attorney General’s office for prosecution. rnrnThe action came two weeks after JUFJ highlighted the issues of day laborers during their annual Labor Seder. Interfaith Worker Justice of Greater Washington has also announced that wage theft will be the theme of this yearâ€™s Labor in the Pulpit and Labor on the Bimah program, during which congregations across the area focus on worker justice issues during their Labor Day weekend services. More than 50 churches, synagogues, and other faith communities participate each year. IWJ has been active in supporting day laborers for quite some time, and this year is moving full steam ahead to support the Union de Trabajadoresâ€™ Wage Theft campaign. IWJ is planning a luncheon in May to educate faith leaders further on the topic of wage theft. rnrnClick here to read JUFJ’s report on the delegation. rn