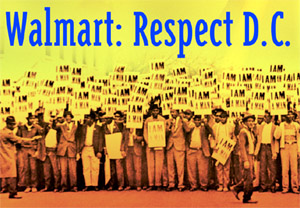 DC Jobs with Justice will be joining other members of the Living Wages, Healthy Communities coalition on Monday to march in the annual MLK Peace Walk in Anacostia. rnrnThe Living Wages, Healthy Communities coalition formed last fall to address Wal-Mart’s plans to build four new stores in DC over the coming year. Invoking the legacy of Dr. Martin Luther King, the coalition is calling on Walmart to â€œRespect DCâ€ by treating workers and communities fairly. A full-page ad in The Informer recalls Dr. King’s final campaign supporting striking sanitation workers in Memphis and connects to Wal-Mart’s record of paying poverty wages and violating basic workers’ rights. The coalition is insisting that a strong community benefits agreement protecting workers and communities be included in any plans to open Walmart stores in the District. rnrnThe Living Wages, Healthy Communities coalition will be marching behind a “Respect DC” banner on Monday in the annual MLK Peace Walk in Anacostia and invites supporters to join them at 9am at the Anacostia metro station, near the exit to the “kiss and ride.” For more information contact Mike Wilson at mikewilson28(at)gmail.com or call 202-974-8224.