On April 10, 2011, 330 people gathered at Adas Israel congregation in Washington DC for Jews United with Justice (JUFJ)’s annual Labor Seder. This was the tenth year that JUFJ presented its Labor Seder and the theme was “everyone deserves a good job”. The Seder combined religion, social justice issues, songs, and fellowship so that everyone who attended felt involved. A Seder is a ceremonial dinner that commemorates the Jewish exodus from Egypt and includes the reading of the Haggadah and the eating of symbolic foods. The Labor Seder used the principles of a traditional Seder with a modern and social justice twist. Every table at the Seder had a facilitator who encouraged discussion amongst the participants and also explained the ceremony. Some of the issues that were discussed during the Seder were the Respect DC campaign, the lack of affordable child care for working people, and the disproportionate availability of jobs for Washington, D.C. residents. Participants at the Seder were asked to take action by filing out cards for the Respect DC campaign and also to write letters to congress about their responsibility to their constituents. This year’s speakers included Rabbi Elizabeth Richman from JUFJ, Debbie Hall from the Childcare for all Campaign at Empower DC, Tracy Lingo from UNITEHERE, Sandy Carpenter from Respect DC, Elissa Silverman from Workforce Development and Jos Williams from the Central Labor Council. Jacob Feinspan from JUFJ said “What keeps people coming back to the Labor Seder and bringing their friends is both the familiar ritual of the Seder and the renewed focus each year on specific local struggles”. 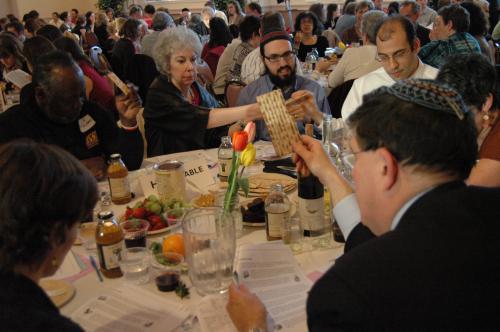