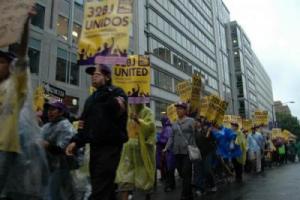 Courtesy of Union City, Monday, October 17, 2011rnrnLess than 24 hours before their contract expired, area office cleaners Sunday night won a tentative agreement with wage increases. “This is not just a win for working families and our communities, but it ensures tenants will receive professional service and gives our economy a much-needed boost,” said Jaime Contreras, 32BJ Capital Area Director. rnrnThe four-year contract, which is still subject to ratification, provides nearly 12,000 of the region’s office cleaners with an average yearly pay increase of 4%. “These are the kind of good jobs that our communities and our country need to move more families into the middle class,” said Valarie Long, 32BJ Vice President. “This is an important victory for cleaners in the Washington- Baltimore area who are united with 32BJ members up and down the East Coast in a campaign for good jobs. rnrnThe union had conducted a series of high-visibility mass mobilizations – including a major march through downtown DC last Wednesday — throughout the region in recent weeks, supported by the local labor movement. The new contract covers 5,000 commercial cleaners in the District, nearly 4,000 cleaners who maintain properties Northern Virginia, over 1,500 cleaners at over 150 buildings in Montgomery County and more than 700 cleaners at over 40 Baltimore buildings. rnrnStory and Photo by Chris Garlockrn