As the Bush Administration pushes an expansion of the guest worker program, 64 Indian guestworkers who mortgaged their futures for the American dream only to find out they had paid $20,000 for an American nightmare, are touring around the country to demand a just immigration policy. DC Jobs with Justice is honoured to have been able to host the workers from the New Orleans Workers Center here in Washington DC and support their quest for justice.rnrnâ€œFor more than one year, hundreds of Indian workers at Signal International have been living like slaves. We paid $15,000 to $20,000 to come here because we were promised green cards and permanent residency, but they lied and gave us 10-month guest worker visas instead. Signal knew about our debt and exploited us,â€ former Signal worker Sabulal Vijayan.rnrnOver 600 workers from all around India left their jobs, sold their homes and took on crushing loans in order to pay the 10 lakh fee that job traffickers demanded.rnAs soon as they arrived in the United States, the workers discovered there were no green cards. Instead, they found themselves sharing a room with 24 others, paying $1000 in rent for it, with ten-month â€œH-2Bâ€ visas that only allowed them to work for Signal. US Congressman Charles Rangel, has called the guest worker program â€œthe closest thing I’ve ever seen to slavery.â€rnrnOn Thursday, April 27th 2008, the Union de Trabajadores (the DC Day Laborer Association) organized a community forum for the New Orleans workers, where they shared stories of the root causes of migration, the slave-like conditions they endured when they arrived in the US, and their struggle to organize.rnrn 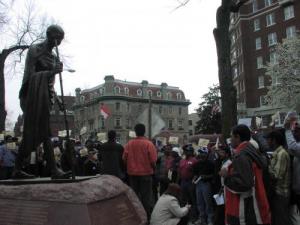 Then on Friday April 28th 2008, chanting “Inquilab, Zindabad” (in English, revolution, long live) the workers marched into the Indian Embassy, flanked by more than 20 media crews and Jobs with Justice supporters, to demand that the Indian government hold high-level talks with US officials to stop the abuses of the guest worker program and bring the labor traffickers to justice. There DC Jobs with Justice staff Ruth Castel-Branco presented a statement of solidarity: “From El Salvador to India workers displaced by civil war and a corporate global economy come to the US, seeking the American dream, only to find when they get here, that America is not a country where all dreams can be realized but one where the rich get richer and the poor are getting poorer. Where big box retail stores are given millions of dollars in government subsidies and itâ€™s the tax payer who foots the bill, where hospitals are closed, schools privatized, good jobs subcontracted, vocational schools underfunded, ex-offender programs cut, and where our immigration policy doesn’t protect the rights of workers but rather creates a pool of low-wage labor to the benefit of a few wealthy CEO’s. Brothers and sisters, we got to turn this around. Your fight is our fightrnrnFinally on Monday afternoon, the Indian workers took their message to the white house and in a symbolic act ripped up copies of their H2B visas. Thank you to all DC are organizations who helped support the workers during their stay, including the ACLU and SAALT. Click here to view a full set of pictures from the guestworkers’ tourrn