Income Inequality Is at a 35-year High in the District

A new report from the DC Fiscal Policy Institute confirmed what we’ve been hearing from workers: wages in low-wage jobs are stagnating, unemployment is lasting even longer, and lots of workers who want to work full-time can only find part-time jobs.

Already this year, we’ve seen workers from Walmart to Georgetown University stand up and demand the right to work full-time, since part-time work at their already meager wages simply isn’t enough to get by. Workers in low-wage jobs know firsthand that $11.50/hour isn’t enough to live in the District, and our Councilmembers shouldn’t have any illusions that the minimum wage increase has fixed low-wages. We have lots of work to do. 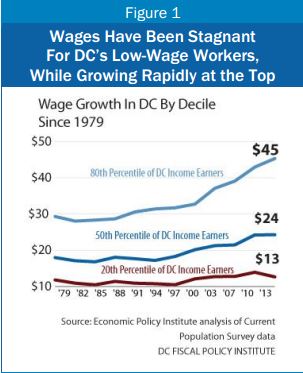 DC’s economy may be well on the road to recovery from the Great Recession, but a look beneath the surface shows that many residents are being left behind. Low-wage workers have seen their wages fall, while higher-wage workers have seen earnings grow by thousands of dollars per year. And workers without a college degree continue to experience levels of unemployment – and especially long-term unemployment – that are far higher than in 2007.

While DC has a number of strengths to build on, such as the increase in the minimum wage to $11.50 an hour, our new report finds that more needs to be done to strengthen literacy and training programs to help more residents earn a living wage.