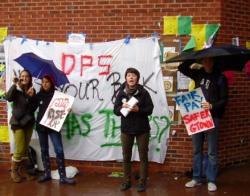 Cold fall rain did not deter more than 40 students and staff who rallied Nov. 13th at Georgetown University to support campus police officers. Representatives from a variety of student organizations, as well as Georgetown staff, gathered on Red Square to show their support for the Georgetown Department of Public Safety (DPS) officers in their union negotiations. The officers’ union, Allied, has been in negotiations with the university since August; the university has yet to agree to the union’s proposal to bring hourly wages â€“ now about $3 less than other area colleges — on par with other campus police in the metro Washington area. rnrnThe issue was brought to forefront after Georgetown experienced two hate crimes based on sexual orientation. Students involved in the resulting dialogue about campus safety realized that the uncompetitive salary for DPS salary resulted in an understaffed department and a lack of resources for officers. After speeches by representatives of the Georgetown chapter of NAACP, the Latino-American group MEChA, Asian American Students Association, and the labor rights group Georgetown Solidarity Committee, the demonstrators carrying signs saying “Show Us Your Values” and “How Much is Your Safety Worth?” marched to the offices of President DeGioia and Vice President Dimolitsas to deliver petitions with hundreds of signatures from students, professors, and organizations, including the College Democrats and Republicans. rnrn- report/photo by Julia Shindel