Fired Workers at Tito Contractors Vindicated at the NLRB

IMPORTANT UPDATE: Less than a week after winning their case at the NLRB, Tito workers won their election to bring a union to Tito Contractors after more than a year of organizing.

A group of men and women in Washington, D.C., who have been organizing to expose abuse and form a union just won their case before a National Labor Relations Board administrative law judge. As a result, many employees who were illegally fired and retaliated against by Tito Contractors will get their jobs back. The judge’s ruling will help prevent employees at Tito Contractors from further retaliation and marks another milestone for these brave immigrants in their campaign to stand up for better jobs. 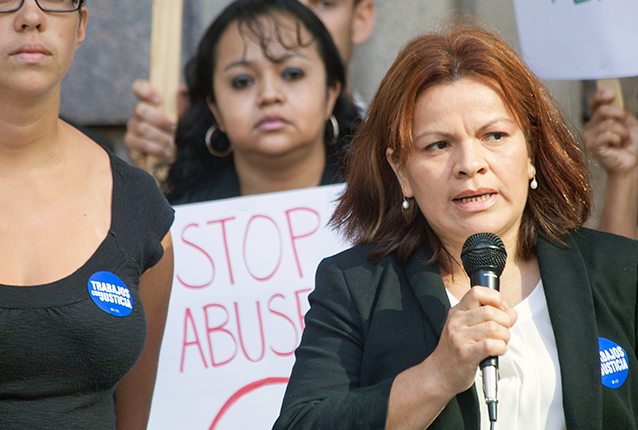 Reyna Sorto is one of the many Tito’s employees fired after sticking her neck out to improve her job. The NLRB ordered Tito to reinstate Reyna, and she is entitled to backpay for being illegally fired.

A number of immigrants employed at Tito Contractors were interested in the idea of forming a union to help change the culture of exploitation at their company. In 2013 Tito’s employees began meeting with their local painters union, IUPAT District Council 51. The workers reported to IUPAT organizers that they were cheated out of overtime and routinely intimidated. IUPAT began an organizing drive, but shortly thereafter Tito’s management started to retaliate. According to Tito’s workers’ testimony presented under oath at the NLRB hearing, supervisors threatened that they would report them to immigration officials, withheld necessary equipment and even terminated several employees.

In the face of this retaliation, IUPAT organizers witnessed a palpable wave of panic among the men and women of Tito who feared they could lose their jobs or be deported and torn from their families if they continued to organize.

The story of too many organizing drives stops here. But IUPAT organizers had heard about the POWER (Protect Our Workers from Exploitation and Retaliation) Campaign and its efforts to make sure all workers can exercise their right to organize and collectively bargain. They reached out to DC Jobs With Justice to learn more, initiating a year of community-labor engagement strategies to protect workers from immigration enforcement so they could organize with less fear of being fired or deported.

Workers at Tito Contractors not only continued banding together to improve the conditions at their job, but also began speaking out against the immigration system that is used to suppress workers’ rights. Workers met with local and federal officials to share their stories and talk about the need for immigration reform to enhance workers’ rights and improve job standards.

Reyna Sorto is one of the many employees fired after sticking her neck out to improve her job. The NLRB ordered Tito to reinstate Reyna, and she is entitled to backpay for being illegally fired. Reyna worked for more than 10 years sorting recyclable materials for Tito.

“Although my work was physically heavy on me I always gave it my best effort. I have always been very proud of doing my job as a woman.” Reyna said the NLRB judge’s ruling means a lot for her family. Despite the NLRB vindicating Tito’s employees, she continues to want to see the president take action on immigration because “companies use us because they know we’re afraid.”

Employers like Tito Contractors believe that they can often get away with threatening and retaliating against immigrants because workers are vulnerable under our broken immigration system. Too often this means that employers can undermine labor standards and evade workplace laws. The administration must pursue executive action on immigration to ensure that workers, no matter where they were born, are able to exercise their labor and civil rights without fear of losing their jobs, getting their wages cut, getting demoted, or getting deported and separated from their families.

re-posted from Jobs With Justice