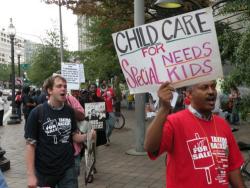 rnWhile the scope and length of the current economic crisis is still unclearâ€”unemployment rates are at a record high, the number of day laborers looking for work at Home Depot is growing and a quarter of DC residents are living below the poverty line– what is clear is that the Fenty administration is chipping away at our Cityâ€™s safety net by selling off the public sector to private interests. This summer DC Jobs with Justice launched the Take Back DC campaign in conjunction with Empower DC, the American Federation of Government Employees and the Dominion of Cab Drivers to protect the public sector and hold elected officials accountable. rnrnPublic health is just one of the sectors on the chopping block. DC’s Addiction, Prevention and Recovery Administration shut down this month, putting hundreds of patients out on the street, as they wait for a private provider to be selected. A few months earlier, the Community Services Agency of the Department of Mental Health was also privatized. 800 patients are still not linked to providers. According to John Walker, President of AFGE Local 383, disability services are next despite opposition from the city’s Chief Financial Officer on the basis that the administration does not have the funds to privatize.rnrnThe Fenty administration has systematically ignored the Cityâ€™s guidelines for privatization: workers have never received the right of first refusal as mandated; the City has been unable to show a 5% cost savings; and has repeatedly defied Council legislation meant to provide checks and balances. This fall, Fenty closed the doors to 13 childcare centers at DC Parks and Recreation (DPR), despite legislation requiring an impact-analysis of the closures. Hundreds of kids have been put out on the street, 160 union workers are now unemployed and the city just lost high-quality, badly-needed child care services in Wards 6,7 and 8 which have been provided since 1974. â€œI have no idea how I will be able to find childcare for my son,â€ said mother Jane Andrews. â€œWhy did the Mayor shut down the centers? This is a federally funded program.â€ rnrnâ€œMeanwhile, according to Ben Butler, President of AFGE Local 2741, Hartsock and the Mayor have been working to eliminate union positions by laying off workers and reconfiguring entire job categories as non-union for new hires. This is reminiscent of the closing of Franklin shelter last fall when the Fenty administration, defying Council legislation, broke down the beds ahead of schedule and moved them out of the building in the middle of the night.rn rnUnder pressure from Take Back DC, the Council amended the Budget Support Act to fund daycare services and in a separate motion, introduced a resolution to explore the initiation of a lawsuit against the executive for failure to follow the law regarding day care program closures. Then on October 6th, the Council denied the confirmation of Interim Director Ximena Hartsock on the basis that she engaged in irregular personnel practices, caused deteriorating staff morale, and failed to comply with the law. Itâ€™s unclear whether the centers will reopen but what is clear is that the Council needs to consider new strategies for holding the Fenty administration accountable. As for Franklin, the administration just put out a Request for Proposals to develop the shelter, one of the last properties DC owns downtown, into a commercial space. rn rnâ€œThe surplusing of public land is part of a larger attempt to privatize public resources and services,â€ concludes Parisa Norouzi, director of Empower DC and founder of the Peopleâ€™s Property Campaign. Take Back DC is a campaign led by labor and community groups working in solidarity through direct action to demand: an immediate halt to the privatization of public services and property; impact assessments of recently-privatized departments; a framework for transparent, inclusive community input; that the City honor union contracts and bargain in good faith; and fair wages for cab drivers and our Cityâ€™s workers. rnrn———————————————–rnrn 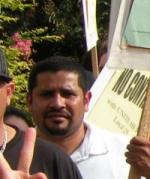 rnProfile of Solidarity: rnJuan Carlos â€œJCâ€ Recinos,rnOrganizer, Reinforcing Ironworkers Local 201rnrnJuan Carlos â€œJCâ€ Recinos loves ironwork â€“ and has devoted the last 14 years of his life to it. Heâ€™s been a member and staff person with Reinforcing Ironworkers Local 201 since 1996, when he enrolled in their apprenticeship program, seeking higher wages and good benefits through a union job. â€œOne of my dreams was to be able to retire with dignity, â€œ JC said. â€œWhen I get old, I donâ€™t want to depend on someone else. I joined the union because I wanted to build my future.â€ rnrnWhile in the apprenticeship program, JC learned about union history and the labor movement and was inspired to spend his free time helping the localâ€™s organizer leaflet job sites. He graduated as Apprentice of the Year and quickly built a reputation in the union, becoming foreman, then general foreman, then superintendent at his company.rnrnWhen a position opened teaching in the localâ€™s apprenticeship program, JC jumped on it. From there, he moved on to become the localâ€™s organizer. â€œOur goal is to increase our membership,â€ JC said. â€œIn order to do that, we have to organize.â€ JC was convinced his union should join DC Jobs with Justice after attending a picket line with his members in support of UNITE HERE members in Crystal City. â€œI believe itâ€™s very important for unions to work together with the community, he said. â€With the community we can make changes and be more successful.â€rn—————————————————rnrn

rnConnecting the Dots: Iraqi Union Leaders Speak Outrnrn-by Bruce Wolf and Maya O’Connor, DCLPJ/USLAW. Quotes from Adam Wright, Union Cities.rnrnPrivatization, the onerous Oil Law, and union busting were at the center of a recent panel discussion between Iraqi labor leaders, and US union members and activists hosted by DC Labor for Peace & Justice/USLAW. â€œWorkers and unions face huge challenges in Iraq,â€ explained Nabeel Mulhim, Foreign Affairs Officer for the Kurdish General Workers Syndicates in Iraq (KGWSI). â€œIt is very dangerous to organize as the anti-union laws of the old regime have been upheld by order of the US Occupation.â€ As the war wages on, the public sector continues to deteriorate. â€œ Electricity and running water are practically non-existent. Working families are struggling and are systematically denied access to a good education, decent health care and good jobs because of corruption and government maladministration. There is political oppression of the working class, but we are standing together.â€ rnrnThe Oil Law has been at the center of public sector struggles in recent years. Oil is a state owned commodity in Iraq but the US has been pressuring the puppet government to impose a new oil law, written here in the US, that would turn Iraqi oil resources over to foreign interests. Despite the challengers, Iraqi workers have been organizing. Ben Butler (AFGE, Local 2741) spoke about the attack on public employees in DC and the closing of DPRâ€™s Child Care Centers, Geoff Millard (IVAW) about GI resistance to the war, Dominic Moulden (ONE-DC) and Linda Leaks (Empower DC) about privatization and the need for greater government accountability.rn—————————————————rnrn 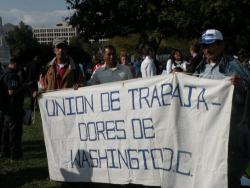 rnDay Laborers Recover $15,000 in Stolen WagesrnrnDay laborers in DC scored another big victory on October 2nd recovering almost $15,000 in stolen wages for eight workers. Several members of the Union de Trabajadores de Washington, DC, DCâ€™s only day laborer association, had been doing work on a DC public school building over the summer and were paid less than promised. They reached out to DC Jobs with Justice and the DC Employment Justice Center who quickly realized this public project entitled the workers to higher, â€œprevailing wagesâ€ for their work. After connecting with other workers from the project and talking with several building trades unions to confirm the proper rates, DC JwJ and the DC EJC went to the Office of Public Education Facilities Modernization to discuss this violation of DCâ€™s contracting laws. rnrnThe Office collaborated in forcing the contractors to pay back wages, including proper overtime rates. This victory not only secures justice for the workers involved, but also sends an important message to contractors who believe they can hire immigrant workers and pay them lower rates. Current broken immigration laws invite such exploitation by creating a pool of undocumented workers who employers believe donâ€™t have rights and canâ€™t organize. But across the country, organized groups of day laborers have been successfully enforcing their own rights, and thwarting the â€œdivide and conquerâ€ tactics employers try to use to lower standards. rnrnThe Union de Trabajadores, with support from DC JwJ, the DC EJC, and the Washington Lawyersâ€™ Committee for Civil Rights, has been doing on-going rights education work among day laborers about wage and hour law, in addition to working to reform the DC Office of Wage and Hour. This fall the Union de Trabajadores will hold a Labor Rights School to train worker leaders as â€œWorkers Rightsâ€™ Defendersâ€ who will both educate and assist other workers in recovering stolen wages through filing claims or planning actions on their employer.rn———————————————–rnrn 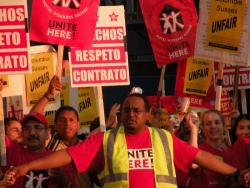 rnUNITED FOR HOTEL WORKER JUSTICE! rnrn-by Mike Hachey, Organizer, UNITE HERE Local 25rnrnSince that first day in February when hotel workers at the non-union Sheraton Crystal City hotel in Arlington led a delegation accompanied by DC Jobs with Justice members to demand that the company respect their desire for a majority sign-up agreement, DC JwJ has actively supported the struggle for hotel-worker justice in Northern Virginia on the picket lines, delegations and on the streets. HEI Hotels and Resorts, owner of the Sheraton Crystal City, is one of the fastest growing hotel management companies in the US. Yet its employees have experienced reduced hours and layoffs, shortages in cleaning supplies and basic materials, and increased workloads, especially in housekeeping. â€œWe surveyed two thirds of the housekeeping department and discovered that of those surveyed, 100% are in pain because of our workload. 90% are taking medicine because of the pain. 70% have had a serious accident at work, â€said Nancy Ramirez, a housekeeper at the hotel. rnrnAs the campaign grows, HEI has required hotel workers to attend anti-union meetings on work time, circulated leaflets accusing the union of making worthless promises, interrogated workers about their involvement in the union, and laid off union supporters, including union leaders, Hermen Romero and Ferdi Lazo. But the struggle continues. â€œSeeing big groups at rallies makes me proud of the fight we have and gives me strength to keep fighting,â€ said Lazo. Meanwhile, at the Hilton Crystal City, workers are leading a boycott of their own hotel to fight for a fair contract. DC JwJ recently endorsed a pledge to support any action that Sheraton workers decide including a boycott of their hotel.rnrn