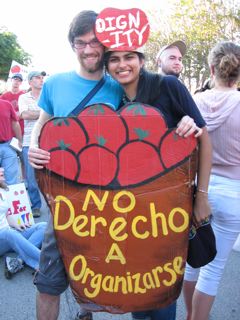 Wearing bright yellow t-shirts reading “Burger King exploits farmworkers,” over 1,500 members of the Coalition of Immokalee Workers (CIW)and their allies – including DC-based leaders and activists — marched through Miami last Friday, November 30, to demand that Burger King work with the CIW to raise farmworker wages and address sweatshop conditions in the fields. rnrnThe high-energy, colorful procession made its way across the city to the beats of hip-hop and son jarocho, lively music from Veracruz, Mexico, as chants such as “si se puede!” echoed through the streets. The 9-mile march linked Goldman Sachs, the private equity firm that owns part of Burger King, to Burger King’s national headquarters for a rally and candlelight vigil.rnrnThe rally featured the presentation of a pile of worn work boots to a Burger King representative, asking company executives to walk a mile in farmworkers’ shoes, in response to Burger King’s claim that farmworker poverty was a “myth.” Farmworkers currently make 40-45 cents for every 32-lb bucket of tomatoes picked, receive no overtime pay, healthcare or benefits, and are denied the right to organize. In extreme cases, workers have been held against their will in documented cases of modern-day slavery. rnrnReported by Ashwini Jaisingh, originally published in Union City, 11-30-07rn