DC Jobs with Justice at the “Ban the Box” Hearing!

Councilmember Tommy Wells, chair of the Committee on the Judiciary and Public Safety, held a hearing at the Wilson Building on new legislation to “Ban the Box.”  The bill would prevent employers from asking job candidates about their criminal history on their applications.  The hearing gave the public a chance to testify about the wording on the proposed “Fair Criminal Record Screening Act of 2014” (1).

During the 4 hour hearing, almost 40 people gave testimony about the legislation.  The stacked line-up included many public witnesses, as well as advocates from many community organization speaking in support of the bill (2).  Among those who presented were the Reentry Network for Returning Citizens,  DC Employment Justice Center (EJC), Restaurant Opportunity Center (ROC), Bread for City, and our very own Executive Director, Nikki Lewis! 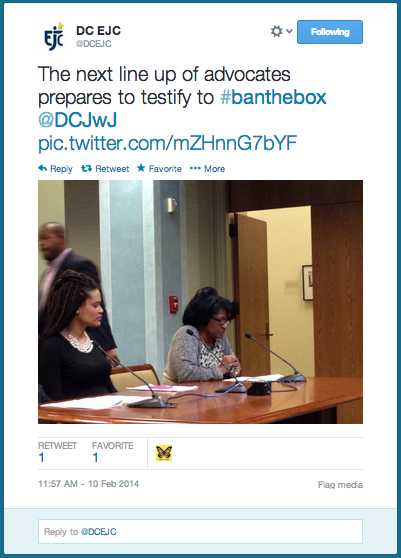 DC EJC tweets a photo of Nikki testifying at the Ban the Box hearing.

As Councilmember Wells explained, DC is estimated to have 60,000 residents with criminal histories and approximately 8,000 returning citizens annually.  With the current background check for employment and housing applications, finding a stable job and place to live is nearly impossible for these formerly incarcerated individuals, as many of the public witnesses conveyed in their testimony.  As a result, residents and family members of those that have had previous contact with the criminal justice system are unfairly forced to suffer unequal discrimination.  With our broken system not providing the opportunity for employment and housing, many end up back in jail.

Perhaps because of the strong public support for the bill, Wells expressed that he plans to make sure the bill passes as one of the most comprehensive pieces of ban the box legislation in the nation.  Significantly, however, many testimonies applauded the bill as an important first step though urged for stronger measures.  For example, several suggested that a “private right of action” should be included to give people the right to take a case of discrimination to court.  Many argued that without also banning landlords from asking about criminal backgrounds, we will not be able to claim that DC has fully “banned the box” because formerly incarcerated people will still face unfair discrimination.  Housing and employment go hand in hand, and returning citizens should have a fair shot at both.

Given that African Americans suffer disproportionate rates of criminal convictions compared to other offending groups, these issues perpetuate the systemic racism caused by our broken justice system (3).  For example, African Americans make up nine out of ten drug arrests in the city (63% of which are for simple possession), despite documented evidence suggesting similar drug usage across racial lines (4).  By banning the box we can make sure that an unfair strike doesn’t prevent people from having a chance to participate in society.

2. Agenda and Witness List – Committee on the Judiciary and Public Safety

3. Racial Disparities in Arrests in the District of Columbia, 2009-2011 – Washington Lawyers’ Committee