These were the chants echoing in the streets on Saturday, as several hundred people marched down 16th Street NW to the White House. 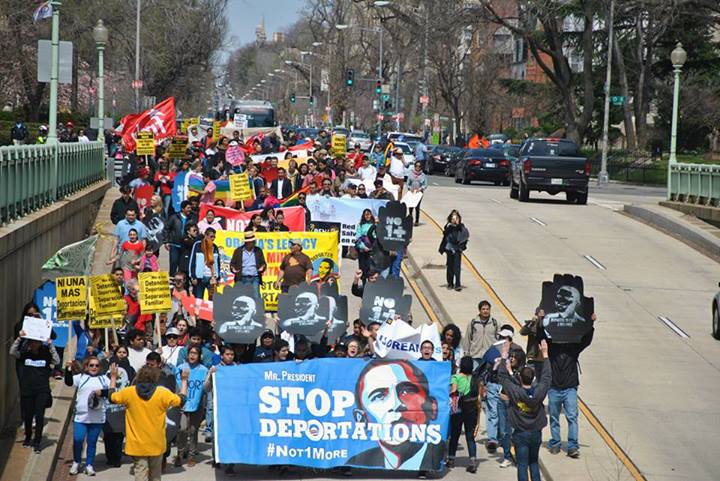 The march had a clear message to Obama: stop deportations now!

As the number of individuals deported since Obama took office in 2008 nears 2 million, thousands of Americans across the country gathered on April 5th to demand #Not1More.  DC Jobs with Justice joined the local action, organized by the day labor organization Trabajadores Unidos de DC – United Workers of DC.  The national day of protests was coordinated by NDLON, the National Day Labor Organizing Network, which says that the president must act to fix the immigration system with whatever power he has, since comprehensive reform remains stalled in Congress.  Grassroots organizations in over 70 cities took up the call to organize rallies in the communities with the clear message to the president that the time to act is now.  In DC, Trabajadores Unidos worked hard to outreach to local organizations, unions, activists, musicians, and both the immigrant and non-immigrant communities.

Around 11AM on April 5th, people began to gather in Lamont Park in Mount Pleasant, a neighborhood that has historically been home to many Central American immigrants.  The crowd was rallied by traditional Mexican folk music played by a local band, as well as speeches from clergy and community members before setting off on a march to the White House.  The parade of marchers was accompanied by colorful flags and signs, drummers, and people in costume.  As the march snaked its way down 16th Street with many supportive cheers and honks from onlookers, the crowd chanted “Up, up with education! Down, down with deportations!”  The day ended with a rally in Lafayette Square, adjacent to the White House, where individuals told personal stories about how the administrations’ policies have torn apart their families.  Despite the seriousness of the issues at hand, the day ended on an upbeat note with music, dancing, and hope for the future.

Photos can be found on the Facebook page of Trabajadores Unidos: #Not1More Photos