CWA members continue to push for a good contract 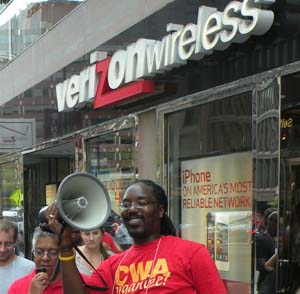 Although the strike is over members of the Communications Worker of America (CWA)are still struggling to secure a fair contract with corporate giant Verizon. Some of the cuts that Verizon is trying to make to the workers contracts include: freezing pensions for active employees and eliminating them for new workers, slashing disability benefits for workers injured on the job, and imposing health care payments of up to $6,800 on active employees. All in total Verizon’s demands total $1billion and will cost about $20,000 per worker. Verizon has made these demands despite the fact that outgoing CEO Ivan Seidenberg was paid $18 million last year-300 times the earnings of an average Verizon worker. rnrnDC Jobs with Justice and the community are supporting CWA members in their battle for a contract. On Friday, September 30th at noon we are going to gather at Verizon Wireless located at 1314 F. Street NW, Washington, D.C. to show our support through leafleting and standing in solidarity. Verizon thinks that since the strike is over the community actions are over. We have to show them that we are still watching to make sure the workers get a good contract.