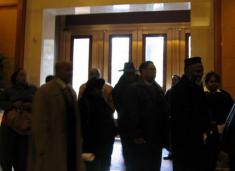 On November 8th, religious and community leaders joined security officers for a delegation to confront representatives of a major property-management company about the low wages workers in their buildings receive. Workers from the Admiral and Allied-Barton company were joined by Rev. Louise Green of All Soulâ€™s Unitarian Church, Imam Johari Abdul-Malik, Rev. Lennox Yearwood of the Church of God in Christ, Mari Villaluna of the DC Employment Justice Center, and Mackenzie Baris of DC Jobs with Justice. rn

rnThe delegation presented a representative of the company with a letter of support signed by dozens of community and faith leaders and asked for a more in-depth meeting to discuss the impact low-wages and lack of benefits have on our communities. rnrnIn October, more than 30 faith, community, and labor leaders had gathered at First Rising Mt. Zion Church for a breakfast to discuss the progress of security officers in winning a first contract. More than 1,000 officers formed a union with SEIU Local 32BJ earlier this year. “We aren’t asking for anything we haven’t earned,” said Officer Charles Earlham. “We are asking for our rights, for our dignity.” rnrnImam Johari Abdul-Malik called on other members of the clergy to put their faith into action by supporting the officers in their demands. “With the community and faith leaders behind us, we can make a difference here,” said Officer Charla Fletcher. She added that some officers earn as little at $8.25 per hour, with no benefits or paid sick days. rnrnThose present included leaders from the Muslim, Jewish, Christian and Unitarian traditions, as well as from Casa de Maryland, Center for Community Change, DC Jobs with Justice, National Capitol Immigration Coalition, STITCH, and other community-based organizations. The gathering ended with discussion of concrete next steps to support the officers, including the community letter and delegation.rnrnPhotos by Mari Villaluna