Employees of Unique Residential Care Center voted 165-0 to join Service Employees International Union (SEIU) Local 1199 in February of 2010. More than a year later, they still do not have a contract. This is because of the company VMT which manages Unique Residential Center. VMT’s sole CEO Solange Vivens has refused to come to the table and bargain for a fair contract for the workers. In fact in a report by the Inspector General, it was found that VMT wrongly spent $181,000 of district funds to combat their staff being able to form unions.While workers have been trying to bargain for a fair contract VMT has taken away $3.35 an hour in each worker’s health and welfare benefits and stripped them of a floating holiday. 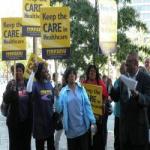 However from 2004 to 2008 an investigation found that Ms. Vivens was paid $3.5 million. Unique is one of two city owned residential facilities for elderly citizens. VMT, previously managed both of these locations but lost the contract to manage Washington Center for Aging Services last year. Workers at Unique say that the elderly residents are being denied basic needs like soap to bath with and that in the winter months the center will not turn up the heat. Unique Residential Care Center was previously named J.B. Johnson nursing facility. VMT and Ms. Vivens changed the name to Unique Residential Care Center causing uproar in the community. J.B. Johnson was an African American Cardiologist and professor at Howard University. The D.C. Committee on Aging and Community Affairs, which is chaired by Council Member Marion Barry, held a special hearing to address the problems at VMT on Mon., Oct. 17 at 2 p.m. Caregivers testified about the findings in the Inspector General’s report, which showed the misdoings of VMT. While the hearing was taking place inside of the Wilson building, more caregivers, community groups, members of SEIU local 1199, and fellow unions held a press conference outside. Workers stated that they greatly enjoyed their jobs and were invested in the people that they cared for. However they wanted the council to hold Vivens and VMT responsible for the violations that had been committed, and the public should be aware of what is going on. rnrnPhoto by Julia Kann Courtesy of Union City