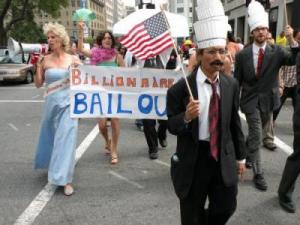 rnrn”Billionaires for a Bailout” and their friends in Congress took to the streets Wednesday and Thursday demanding blank checks from taxpayers and sending the message “We Broke It, You Fix It.”rnrnThe creative street theater performance was organizedrnby DC Jobs with Justice highlighted the absurdity of offering a $700 billion “blank check” bailout package to the same banks and investment houses responsible both for the current financial crisis on Wall Street and the foreclosure crisis on Main Street. rnrnDC JwJ activists further demanded that Congressrnpass an economic recovery plan focused on tax reform and corporate accountability, green jobs, and preserving housing, health care and pensions for average Americans. rnrnOn Weds, “Billionaires for the Bailouts” squared off against taxpayers and activists outside Bank of America, Citibank and BB&T Bank branches a few blocks from the White House. Thursday, as the House deliberated on a new bailout package, DC JwJ took the performance to Capitol Hill, performing just off the Capitol grounds. rnrnThe action was one of dozens of actions organized nationally by Jobs with Justice.rnrnThe watch You Tube footage of the DC action and see other actions around the country, visit http://www.jwj.org/bailout101report.htmlrnrnPhotos and audio clips are also online at the PBS Online Newshour:rnhttp://www.pbs.org/newshour/indepth_coverage/business/bailout_slide/index.html?type=flash rnrnrn