Award Recipients Announced For 2010 “I’ll Be There Awards” 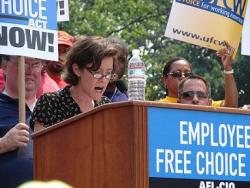 Former director of American Rights at Work, Mary Beth Maxwell (left); ACLU-NCA Executive Director Johnny Barnes; The Justice at Wings Campaign and Fair Budget Coalition’s Kristi Matthews will be this year’s awardees for the 2010 DC Jobs with Justice â€œIâ€™ll Be There Awards.â€ The annual awards ceremony – which will take place on June 10th – honors individuals and organizations for exceptional solidarity work in the Metro DC area. rnrn 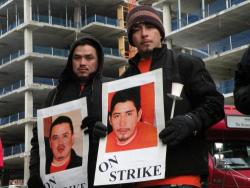 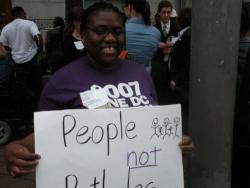 “This year we’re hoping to raise $20,000 from our ad book and the good news is we’re getting there,” says Roger Newell, Chair of DC Jobs with Justice. â€œThe program book is filling up fast, but itâ€™s not too late to place an ad.” rnrnThis year DC JwJ has many victories to celebrate and struggles to commemorate, including the Wage Theft Campaign, which has recovered more than $15,000 in unpaid wages; the launch of Take Back DC, a coalition led by labor and community allies, to protect the public sector and hold elected officials accountable; the Justice at Wings Strike, which is demanding living wage, benefits, fairness, and dignity for reinforcing ironworkers at Wings Enterprises; and the introduction of legislation to prevent the implementation of the Secure Communities program, a national deportation program. rnrnFor more information, and to place an ad in the program book, contact Ruth Castel-Branco at 202-974-8281.