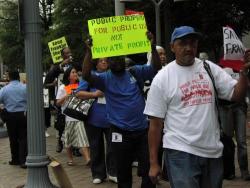 Over 200 workers and community activists rallied outside the John A. Wilson Building Tuesday morning to protest Mayor Adrian Fenty’s attacks on workers and ongoing attempts to sell public property to private interests without community input. “We now have an administration that is of profiteers, by profiteers, and for profiteers,” said Metro Council President Jos Williams. “Tenants are being ripped off, the homeless are being ejected from shelters, and workers are being taken advantage of. When will it end? I say that it ends now!” Protesters – including union members from AFGE, AFSCME, and AFT/WTU dressed in their union colors – chanted “DC Council, take a stand, stop selling public land,” to the beat of an energetic drummer while dozens of police officers looked on. “We are here today to welcome Councilmembers back [from their summer break] and let them know that there is no more business as usual, no more back room deals for developers,” said Pariza Norouzi of Empower DC. Empower DC is pushing for the passage of a bill – co-sponsored by Councilmembers Harry Thomas Jr. (D-Ward 5) and Marion Barry (D-Ward 8) – that would require transparency and public involvement when developing public property. Members of the community organization have also been fighting Mayor Fenty’s decision to close the Franklin homeless shelter – located at the lucrative corner of 13th and K St NW – and sell it to private developers. Speakers at the rally also criticized the DC City Council for their failure to act as a counterweight to Mayor Fenty’s drive for more control and warned Councilmembers that their inaction would hold consequences for their re-election bids. Following the rally, workers and activists overflowed DCrnCity Council chambers, forcing the Council to open an overflow room and rotate people in and out as seats became available.rn- reported by Andy Richardsrn