DC Jobs With Justice is pleased to announce the four honorees to be celebrated at this year’s “I’ll Be There” Awards: Alya Solomon, longtime advocate at the DC Labor Council, Reverend Graylan Hagler of Plymouth United Church of Christ, Youth-Led of Sasha Bruce Youthwork, and Trabajadores Unidos de Washington, DC. Click here for more info on the event and ticket pricing. See below for more info on the honorees. 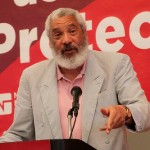 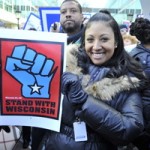 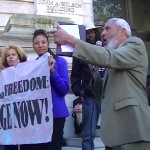 Rev. Hagler and Alya pictured in a rally for the Large Retailer Accountability Act. 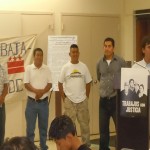 Alya Solomon joined the labor movement in 2008 when she started at the Metropolitan Washington Council, AFL-CIO. During her tenure at the Metro Labor Council, she was a tireless and effective advocate for working families.  She worked on a plethora of issues ranging from the private sector to public sector legislation and was a strong ally and advocate on issues such Paid Sick Days, advocating for union jobs, increasing the living wage and minimum wage, immigration reform, prevention of wage theft, refunding city employees for furlough days taken and the list goes on.

Reverend Graylan Hagler is the Senior Minister at Plymouth Congregational United Church of Christ and a tireless activist for social and economic justice issues in the DC area and abroad. He has served as the chaplain for UNITE HERE Local 25 and directs Faith Strategies, an interfaith group that unites faith with labor for worker and community justice. In the past year alone, Reverend Hagler has led efforts to pass the Large Retailer Accountability Act, ensure patient safety and safe staffing in DC hospitals, demand an end to deportations, reclaim quality public education for all residents, and much more.

Youth-led of Sasha Bruce Youthwork focused on worker rights efforts and expanded its youth-adult organizing efforts by teaming up with DC JWJ, Washington Interfaith Network and DC Jobs Council.  Students from Ballou High School worked on a DC JWJ public transit campaign and the minimum wage campaign by making phone calls and speaking with council members as well as testifying at public hearings.  Youth-led then teamed up with WIN and DC Jobs Council who are currently fighting in the “Ban the Box” campaign. Students spoke at an action in front of several council members and over 500 people.  Currently youth have been working to build up the members of the coalition and are meeting with council members to secure the necessary votes to support the Fair Criminal Record Screening Act.

Trabajadores Unidos de Washington, DC is a grassroots organization fighting for the rights of day laborers and other immigrant workers in the DC area. What began as an organizing project at various day laborer hiring sites around DC has turned into an independent organization that has secured victories on wage theft, abolishing Secure Communities in DC, fighting deportations, and driver’s licenses for all.